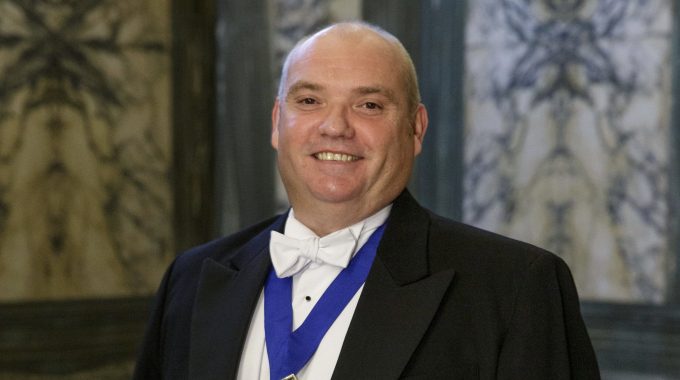 Since my last update we held the City of London Police Commissioners Dinner in September, with a full house of members enjoying Ian Dyson’s QPM last presentation after 6 years.  The dinner, provided and hosted by JP Morgan (with thanks to Jon Denial), was excellent as always. Thanks also go to our sponsors, Kings Secure Technologies and Axis Communications.

In October we held our Annual Dinner in the Grand Hall of the Old Bailey with 200 members and their guests attending; thank you to Past Master Nigel Churton for gifting the very quaffable French red wine, which was enjoyed by everyone. The Royal Military Police Provost Marshall, Brigadier Vivienne Buck, awarded the Provost Marshal (Army) Sword to Frederick Carter for all his work in preparing virtual presentations and ceremonies, plus helping to develop the new website and other online platforms in the last year. Sheriff and Alderman Alison Gowman presented the Sheriffs’ Award for Bravery to Lukasz Koczocik, for his heroic actions in the Fishmongers’ Hall attack. Lukaz was overwhelmed by receiving the award and all the attention; he was very proud and said he would never forget the evening.

I was very pleased to attend 35 Engineer Regiment (EOD&S) headquarters in Saffron Walden to present the inaugural Hector Shield to Cpl Marshall. I also had detailed discussions with Commanding Officer Lieutenant Colonel James Cackett on how the Company and regiment might work closer together, including setting up a mentoring scheme.

On the 10 November we held our Common Hall, which is the Company’s AGM and Awards evening.  The event was held in the magnificent surroundings of Saddlers’ Hall, with Alderman and Sheriff Nicholas Lyons in attendance. A number of new Apprentices were enrolled, with completing apprentices gaining their Company Freedom, including my own apprentice Tom Little.  There were also several members gaining their Freedom of the Company, with a number of Freeman progressing and being clothed as Liverymen, including my first Apprentice, Jordan Smith. We then went on to award the Security Dog of the Year awards with winners from the Civilian security sector, the Police, and Armed Forces. This is always a very lively part of the proceedings, and the dogs certainly like joining in with the clapping!   The award ceremonies culminated with the presentation of commendation certificates for the Sheriffs’ Award for Bravery to five very brave and deserving finalists.

I urge all new and existing Freemen to apply for their Freedom of the City of London which will allow them to then progress to Liveryman (after qualifying period).  The next opportunity for both Freedoms and Livery of the Company will be at the Master’s Installation Luncheon on June 7 at Drapers Hall.

All Company committees are looking for new members, and we are also looking for Stewards of the Company; if anyone is interested, please reach out to the Clerk.

I have attended a number of lectures from other Livery companies; Civic events including the Lord Mayors Show, where I was supported by the Senior Warden Paul Miller and the Clerk, we walked as part of the Modern Liveries float which was great fun – after a break last year due to the COVID pandemic, it was great to see such a large turnout of the public to cheer us all on. If you watch the show on iPlayer, you will be able to clearly see a group of WCoSP apprentices walking with our affiliate 3MI Bn; they all really enjoyed walking and representing the Company.

I represented the Company at various Remembrance events, and should you be close to St Pauls Churchyard, you will be able to see the WCoSP cross placed in the ground with others, including that of the Lord Mayor.

I hope you all have a great Christmas with your family and friends, and hope to see you at our Carol Service in the Tower of London or at the lively and very Christmassy Christmas Lunch in Apothecaries’ Hall, (both sold out within hours of being advertised so please get in early next year and for all future events).

I look forward to seeing you all at our events in the New Year.