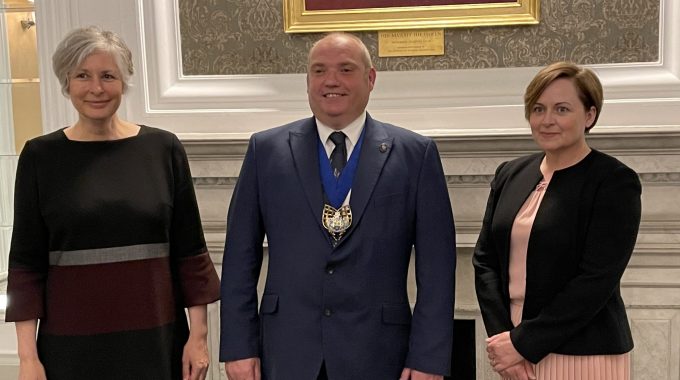 We were privileged and delighted, that the Commissioner was represented by A/Deputy Commissioner Helen Ball QPM, who was ably supported by Assistant Commissioner Louisa Rolfe OBE.

A pre-dinner reception was held in the Churchill Bar, Royal Air Force Club where we were surrounded by paintings of past Chiefs of the Air Staff including Lord Trenchard, the first such incumbent who subsequently became Commissioner of Police of the Metropolis.

A contingent of Metropolitan Police Volunteer Police Cadets welcomed our guests and provided a very smart guard, lining the stairs to dinner which was held in the delightful setting of the Sovereigns Room where we enjoyed excellent food and wine.

Our guests, including the Master Firefighter Graham Maltby, were welcomed by our Master, Stephen Emmins. He also highlighted his recent attendance at the Metropolitan Police Volunteer Cadets awards where both A/Deputy Commissioner Ball and Assistant Commissioner Rolfe were lead participants.

The Deputy Commissioner gave a personal and insightful presentation under the Chatham House rule of current issues affecting the Metropolitan Police Service, challenges moving forwards and highlighted significant achievements. She complemented our impressive Apprentice scheme and its engagement with the Police Service and referenced individuals who are serving police officers.

Deputy Commissioner Ball and Assistant Commissioner Rolfe fielded questions from the attendees which they addressed with candour and passion. Ian Dyson QPM, recently retired Commissioner of the City of London Police and a guest, kindly addressed a question on fraud.

We are most appreciative of the support of James Brown and SelectDNA for their sponsorship of this event which will enable a significant donation to the WCoSP Charitable Trust.