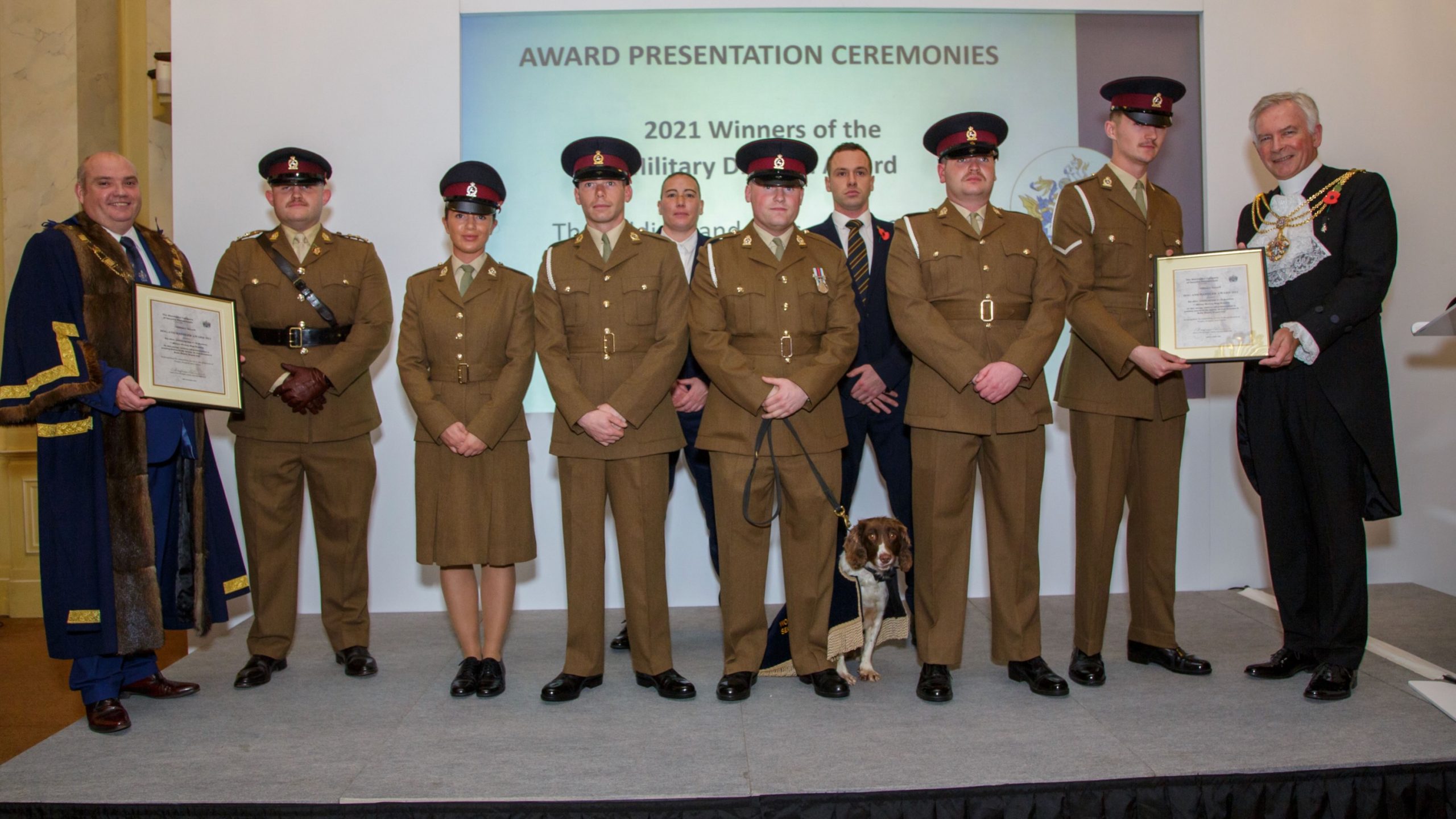 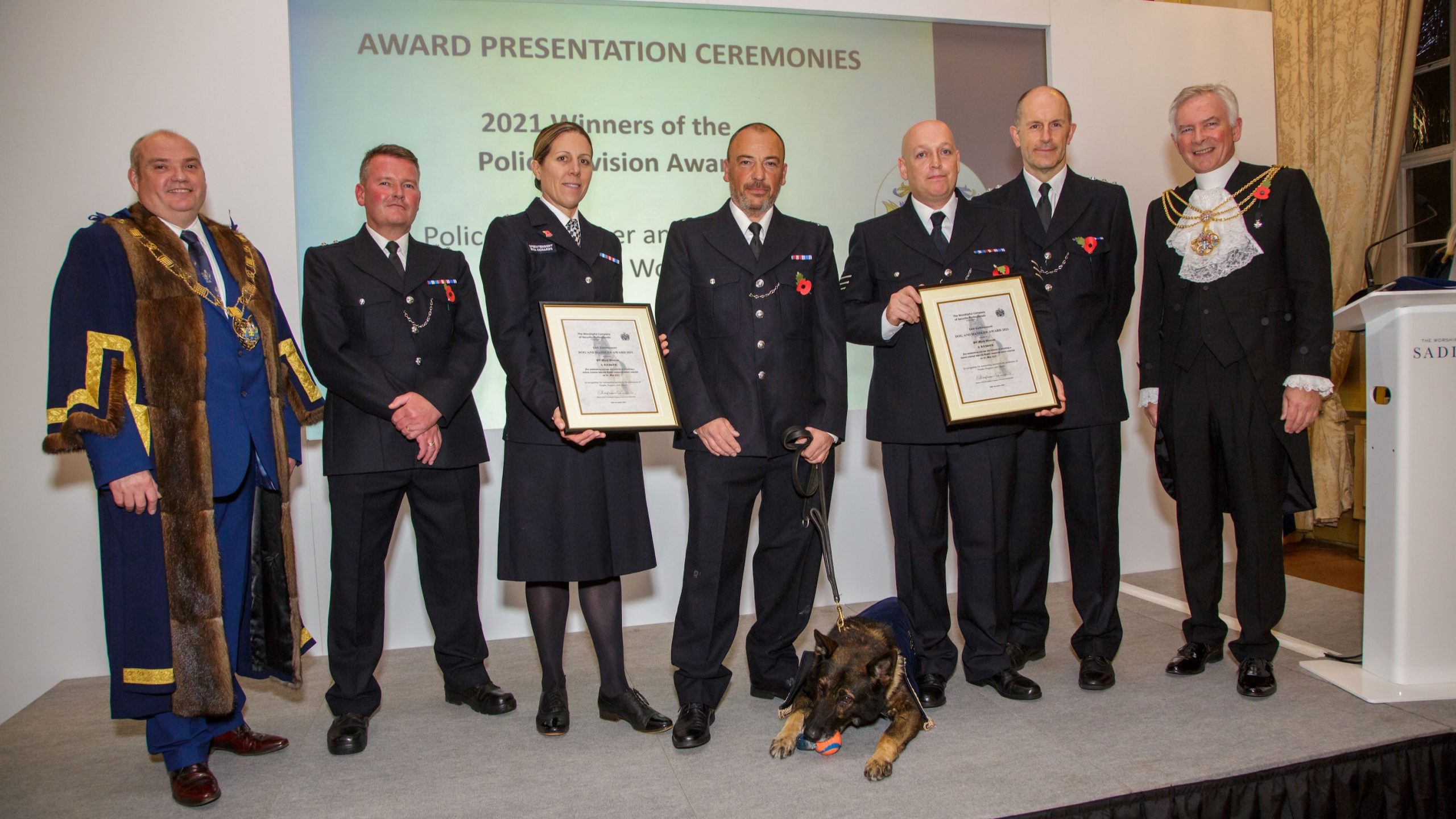 Kaiser and his handler PC Mark Woolcott of the Metropolitan Police Service, 2021 recipient of the Civilian Police and Law Enforcement Services Division Award 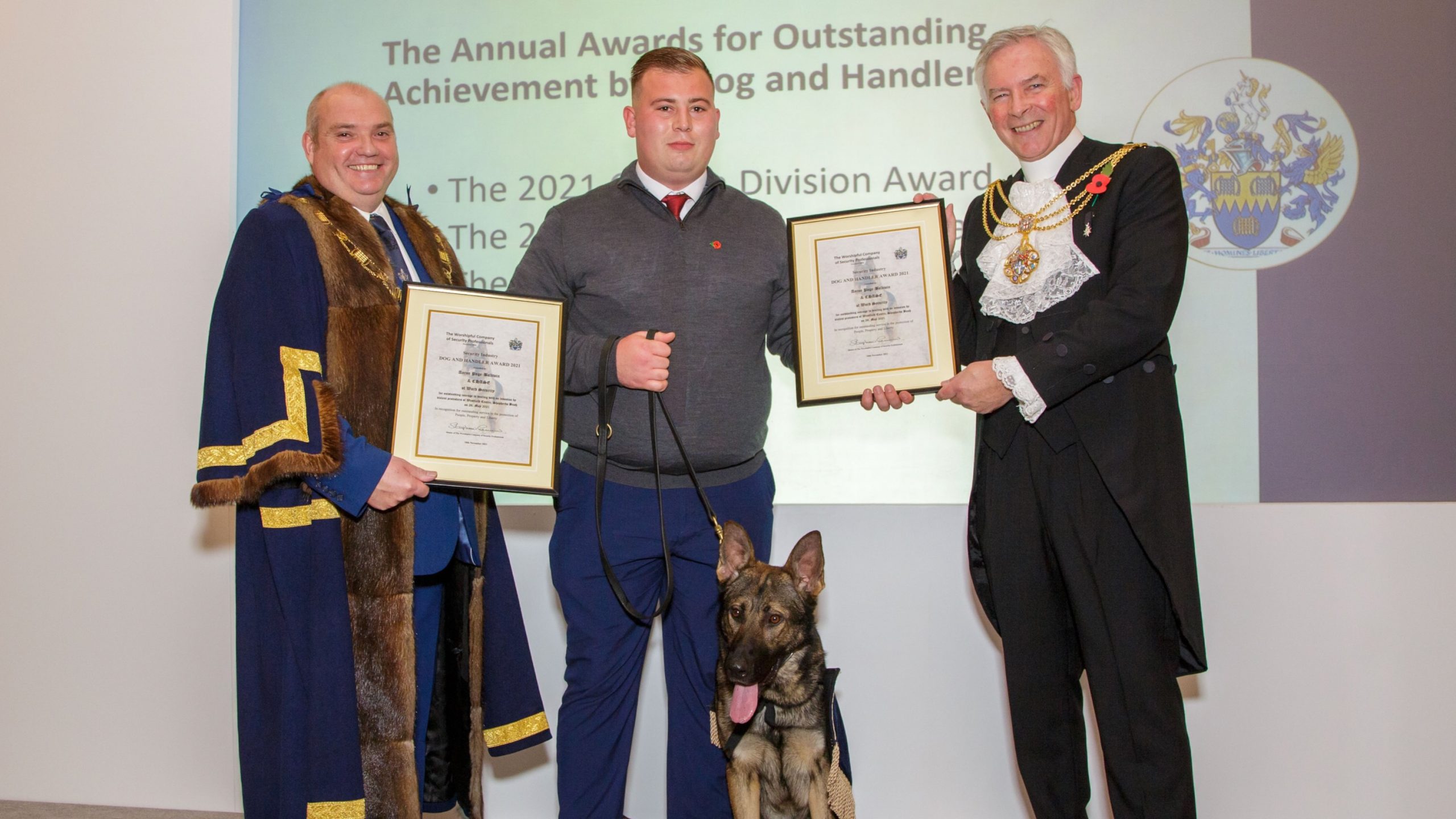 Chase and his handler Mr Aaron Page-Baldwin of Ward Security, 2021 Recipient of the Civil Division Award

The last 30 years have witnessed a phenomenal growth in the use of dogs by the police, military and the security industry from general duties to specialist detection of drugs, explosives, firearms, explosives and money. As security professionals, this Worshipful Company wished to acknowledge and publicise the valuable work done by dogs and their handlers in the United Kingdom.

Every year, an Award is made for outstanding achievements by working dogs and their handlers in each of these three divisions:

Because of the wide range of work undertaken by dogs and their handlers, the criteria for ‘outstanding achievement’ are wide and include: individual heroism; work record achievement; dog training; animal welfare; innovation and long term contribution to working dogs.

Awards can be made to: an individual dog and its handler; a team of dogs and handlers or an individual who has made a lifelong contribution to working dogs.

History of the Awards

In 2010, the Worshipful Company of Security Professionals was granted its Royal Charter and in that same year, the, then, Master of the Company, Don Randall, discussed with the, then, Provost Marshall (Army), Brigadier Eddy Foster-Knight, how the Company could recognise and promote the use of working dogs by the military, police and law enforcement agencies. The answer was to make annual awards to dogs and their handlers in the UK military and UK police. The Company formed a Dog Awards Committee under the Master, Don Randall with his Consort, Angie Randall as a co-opted member.  This Committee judges all entries and decides on the winners in each category. The first presentations were made in 2010 at The Mansion House by Angie at the annual dinner of the Company. The first winners were: L/Corporal Steven Purdy & Military Working Dog ‘Chocolate’ of 101, Military Working Dogs Regiment for bravery on operations in Afghanistan and the Metropolitan Police Service Dog Breeding Programme for pioneering contributions to international police dog breeding.

The Company realised that an Award was needed for dogs and handlers working in the private security industry and it was agreed to liaise with the National Association of Security Dog Users (NASDU) which held annual national dog trials that included obedience, agility, and security work.  It was decided to award the winner of the NASDU trials with our Outstanding Security Dog of the Year Award. The first winner was Yuko and his handler/trainer Stefan Leca in 2015. With the NASDU National Trials no longer being held, the Committee now uses the nomination process outlined in ‘How to Apply’ (above).

Over the years there have been very many outstanding recipients of the Awards in all three divisions. Here is a representative selection:

The application year is from September-to-September and the Company is open to nominations throughout that period. The deadline for submissions is 30. September each year to allow the Award Judging Committee to select and notify the winners before the award presentation ceremony each November.

Working dog units in the military, police and law enforcement agencies are invited to submit nominations by requests sent in June. The National Association of Security Dog Users publishes details of the Award in its newsletter but there is no need to wait for an invitation if you wish to nominate a candidate(s) for an Award in any of the three divisions.

During September, the members of the Award Judging Committee (drawn from experienced members of the Company) individually consider every application in all three of the award divisions and award marks based on:

There is no set template for the nomination, but details should include:

The winners, their close family and their nominator are all invited to attend.

If a winner is unable to attend in person, their nominee can collect their Award on their behalf.

The Award consists of a framed certificate and citation. An additional certificate is provided for the winners’ Unit or employer.

Full details of the venue and timing of the presentation will be sent to the winners by the Secretary.