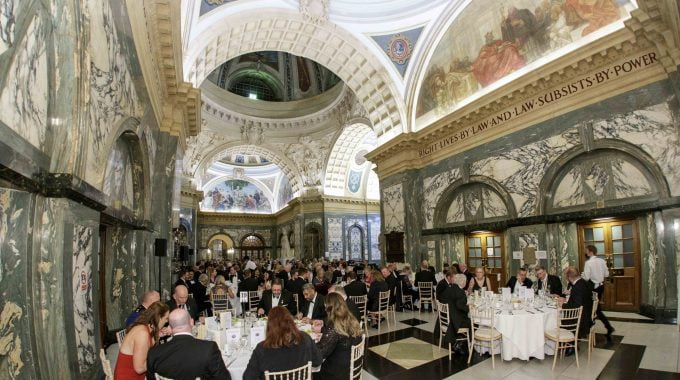 The Worshipful Company of Security Professionals were able to hold their Annual Dinner in The Grand Hall of the Central Criminal Court of England and Wales (Old Bailey) on the 14 October 2021. It was the first time that the Company has been able to use this amazing venue, and all Members and guests were clearly overawed to be there. The Grand Hall at the Old Bailey is one of the most prestigious venues in the City of London, not open to all, and this year’s feast lived up to the venue’s reputation.

Guests were greeted on arrival by the Master Stephen Emmins, and the Senior Warden Paul Miller. The guests proceeded to their allotted tables to welcome the formal procession comprising the Master and his wife, Alderman & Sheriff Alison Gowman, the Senior Warden, Middle Warden, Junior Warden, Provost Marshal (Army) Brig Vivienne Buck, the Chaplin Canon Roger Hall MBE and the Clerk.

Grace was in the able hands of the Company’s Hon Chaplain, Canon Roger Hall MBE. An excellent meal was produced with wine (Chateau Tour St Bonnet 2005) gifted to the Company by Past Master Emeritus Nigel Churton MBE. Music was provided by the RAF Salon Orchestra, who played during the reception and as the top table processed into the hall. Later they provided a sterling musical interlude, including a rousing rendition of the ‘post horn galllop’. They were heartedly thanked by the Master and the assembled Company.

During his speech, the Master welcomed the guests, Alderman & Sheriff Alison Gowman who was elected as Sheriff on 28 September 2021, Royal Military Police (RMP) Provost Marshall Brigadier Vivienne Buck, and the company’s Honorary Chaplin Cannon Roger Hall MBE. The Master then congratulated Past Master Barrie Stewart on his admittance to the Company’s Charter and encouraged all members to look at applying for this prestigious accreditation.

Then the Master gave a special welcome and thanks to our Sponsors, Ian Carter and Mitie, for their generosity and support. Without such sponsors’ generosity, we would not be able to hold this magnificent dinner. Ian was presented with a framed sponsor’s certificate.

The Annual Dinner then saw the award of The Provost Marshal (Army) Sword, which is presented annually to the individual who, in the eyes of the Master, has done most to promote and support the work of the Company. The winner for 2021 was Frederick Carter who had undertaken a vast amount of work setting up the Company’s virtual capacity and associated actions during the COVID-19 pandemic; the sword was presented by the Provost Marshal (Army) Brigadier Vivienne Buck. The Master called Ray Williams for the presentation of the Register of Recipients of the PM(A) Sword, a volume that Ray produced and gifted to the company.

The highlight of the evening was the presentation of the 2021 Sheriffs’ Award for Bravery. Instituted in 2006, this national award celebrates heroes or organisations who have contributed to safeguarding our “people, property or our liberty.” The awards are judged by the two incumbent Sheriffs of the City of LonKdon together with the two Sheriffs’ Elect. They collectively, identified the Principal Recipient for this sixteenth award. There will, in addition, be five Commendations, that will be Awarded at Common Hall. We are indebted to the now past Sherrifs, Alderman Professor Michael Mainelli and Chris Hayward who, due to their extended terms have judged these awards for the past three years. I am pleased to say that their support and enthusiasm for the awards has been carried forward to the current Sheriffs, Alderman Alison Gowman and Alderman Nick Lyons. We thank them for their engagement and support and wish them every success during their term of office.

In front of some 190 Members and guests, the 2021 Sheriffs’ Award was presented by Alderman and Sheriff Alison Gowman to Lukasz Koczocik, the Head Porter at Fishmongers’ Company.

On 29th November 2019, Fishmongers’ Hall on London Bridge was the site of a terrorist attack. The perpetrator was shot dead by the Police. It quickly became known that there had been two fatalities and several further injuries. One of the participants in this denouement was Lukasz Koczocik. Lukasz is the Head Porter at Fishmongers’ Company. In his 14 years of employment, he has prepared the building for innumerable events. On the day in question, the charity conference was running smoothly, much like any other. The first indication he received that something had happened was the screaming of a colleague that someone had been stabbed. Lukasz was on a lower floor of the building. After alerting his line manager, Lukasz proceeded towards the incident, only thinking that his first aid skills might be of use. When Lukasz arrived at the incident it was clear that something was very badly amiss and that this was not an accident. On hearing screaming and seeing overturned furniture, Lukasz advanced further into the Entrance Hall to identify the cause. It was a man holding two long knives, already bloodied, with one body lying on the floor and another on the staircase. Although able to escape, Lukasz did not flinch. He recollects two others were throwing chairs at the perpetrator in desperation, but that this act was having no deterring effect. As he stated later, Lukasz now understood the situation precisely. It needed more direct action. He was aware of his loneliness as others backed away. He came face to face with the terrorist. On the adjacent wall was a ceremonial boarding pike. Lukasz took the initiative and grabbed it. The terrorist had already mortally wounded two others with fatal stabs. Lukasz landed one strike on his opponent’s shoulder, but the tip of his blade hit resistance, an indication that the terrorist may have had some form of body armour (subsequently revealed to be an imitation suicide vest). In counter, the terrorist moved in closer and began slashing at Lukasz’ defending arm, inflicting hand and shoulder wounds, and forcing him to drop his weapon. Refusing to cede ground, Lukasz remained in grave danger. Remarkably though, he had already achieved what needed to be done, namely he had bought just enough time to allow others with equivalent courage and resolve to come back armed with fire extinguishers and narwhal tusks. In a further vicious minute or two, as a team they then matched and overwhelmed the perpetrator, eventually harrying him out of the building. It is the case that after Lukasz entered the fray, no other people were injured save himself.

The Master gave the toast to the guests and Alderman and Sheriff Alison Gowman to respond to the Civic Toast and on behalf of the Guests. At the end of the evening, the Master gave various thanks and Parish notices and the top table processed from the Hall.

Dinner with the Commissioner of Police of the Metropolis

On Friday 6 May 2022, the Worshipful Company of Security Professionals were pleased to commemorate…

The Company hosted a Whisky Evening in The Morgan Giles Room at HMS BELFAST on Thursday 7 April 2022.…

Recent Posts
Follow Us
Categories
Follow Us
Recent Posts
Recent Projects
Tags
Anniversary Event Apprentice Scheme Chair Charitable Trust Funding Livery Master Met Police Metropolitan Police Service Middle Warden Police Commissioner Spring Dance Stephen Emmins Trustees
Interested in becoming a member of the Company?
Fill out the form and the Clerk will be in touch to discuss your application.
Become a Member
Copyright © 2021 WCoSP. All rights reserved.
Back To Top
This website uses cookies to improve your experience. We'll assume you're ok with this, but you can opt-out if you wish.
Cookie SettingsAccept All
Manage consent