Livery Companies of the City of London usually have formal links with the Armed Services, with many Companies having more than one link to a Military Unit. Affiliations, as they are known, are active, and have an important role for both the Military and the Company.

The Services’ Committee (SC) manages the links with the affiliated Military Units, listed below in order of affiliation. Points of contact take the lead in maintaining regular communication with each Unit. The Services Awards Working Group (SAWG) oversees arrangements for the annual presentation of Awards by the Company to a worthy recipient from each of the six Military Affiliates.  The recipient is nominated by their own Military Unit and the Award is presented by The Master, usually at the annual Services’ Affiliates Lunch held during Armed Forces Week in June.

The Company’s mentoring scheme, administered by the SC, for those who leave the military and the civilian emergency services aims to help leavers gain employment in the corporate security sector, either in an employed position, or as a self-employed individual. The Scheme does not seek to place an obligation on a mentee to join the Company, and the service is provided free of charge. Please check the WCoSP Mentoring Scheme for further details. 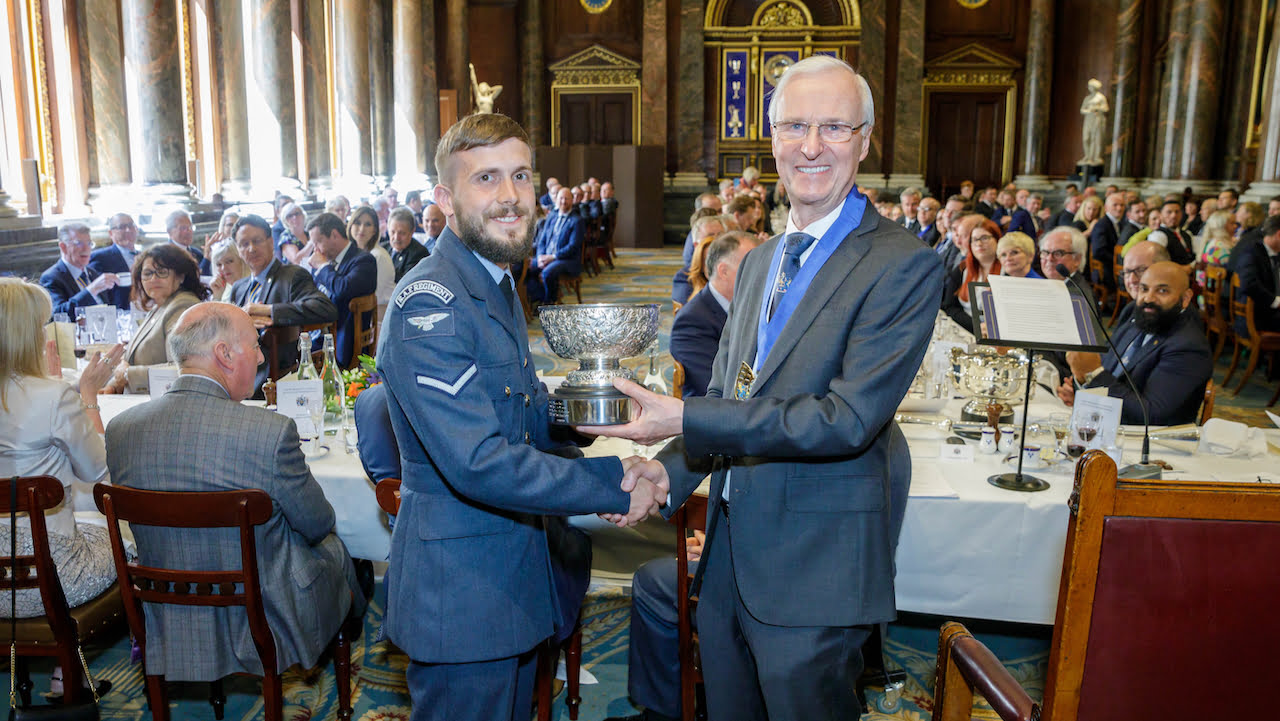 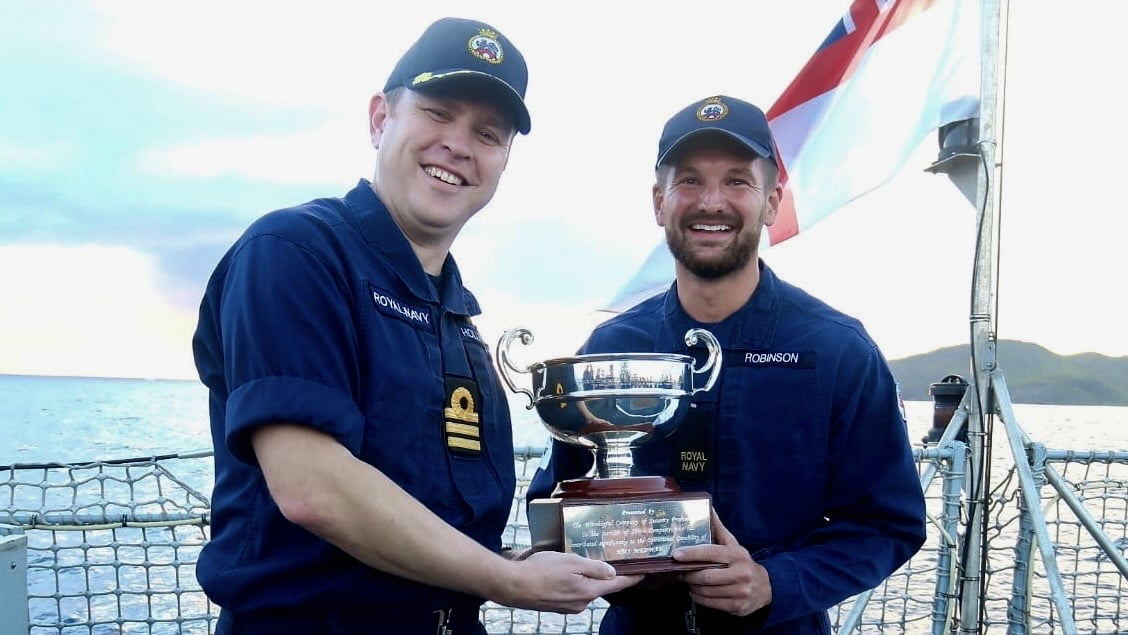 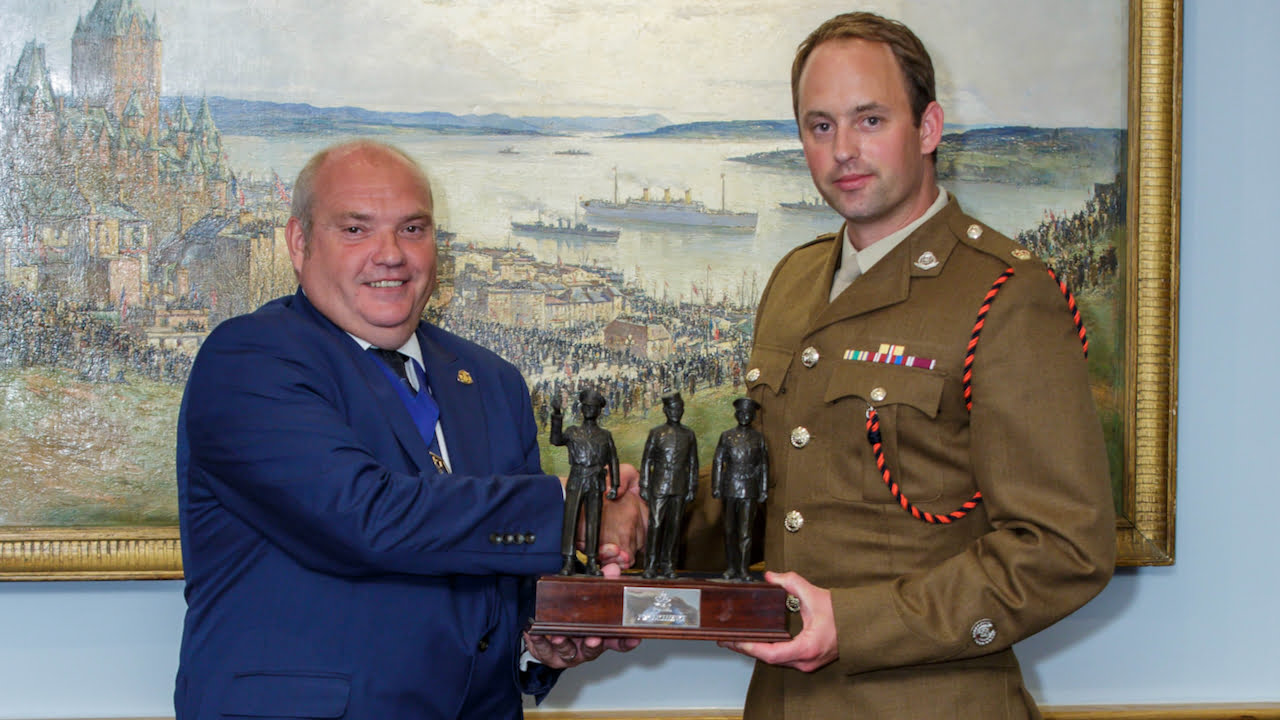 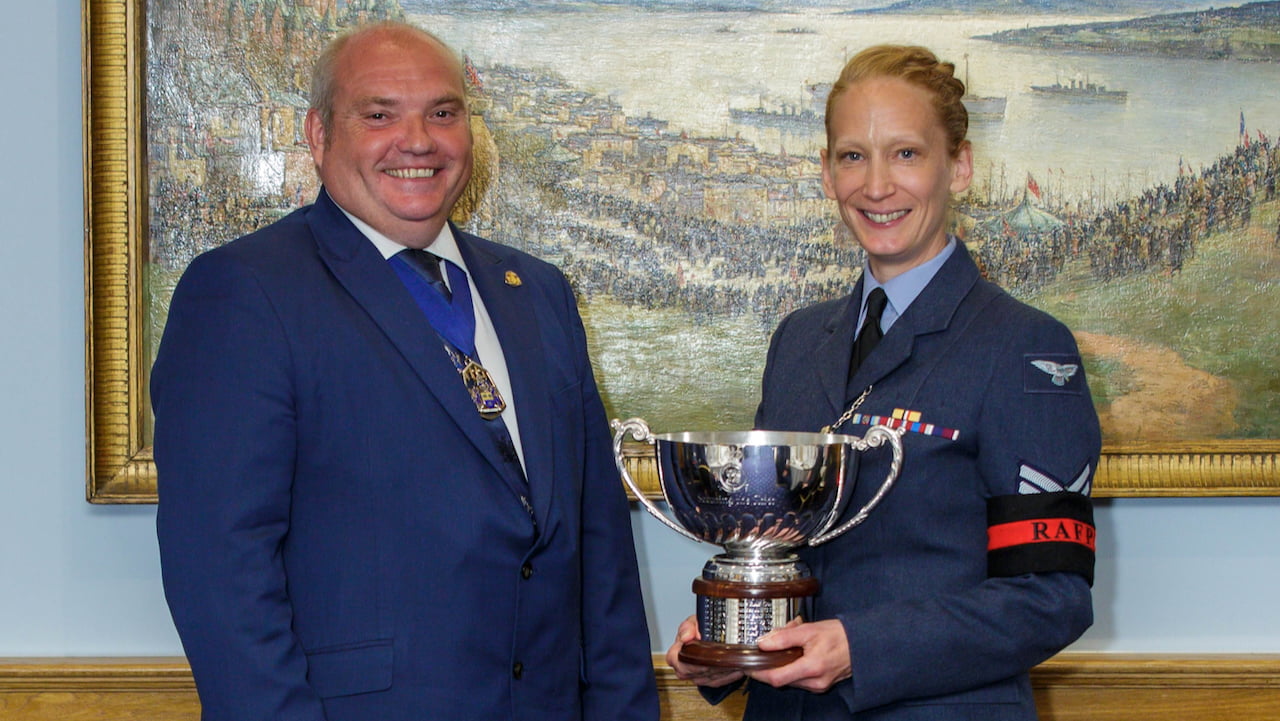 Sgt Louise Powell, 2022 Recipient of the Securing the Skies Award 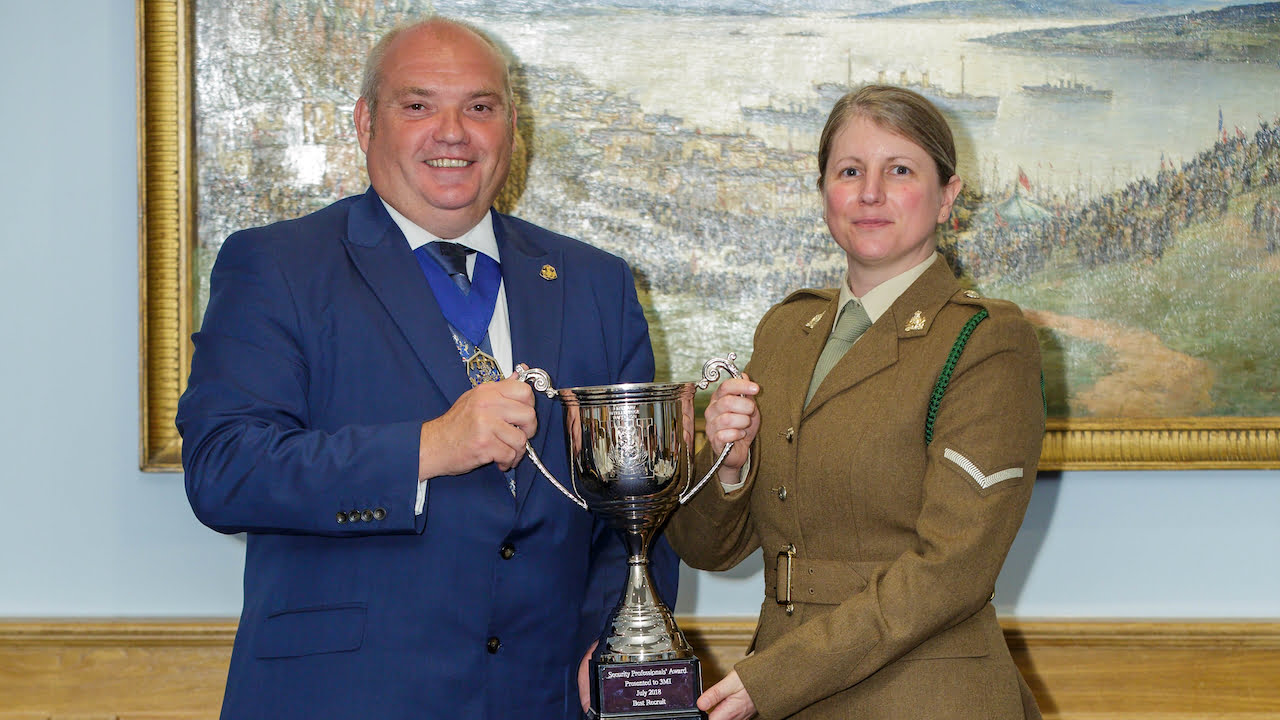 2022 Recipient of the Best Recruit Award 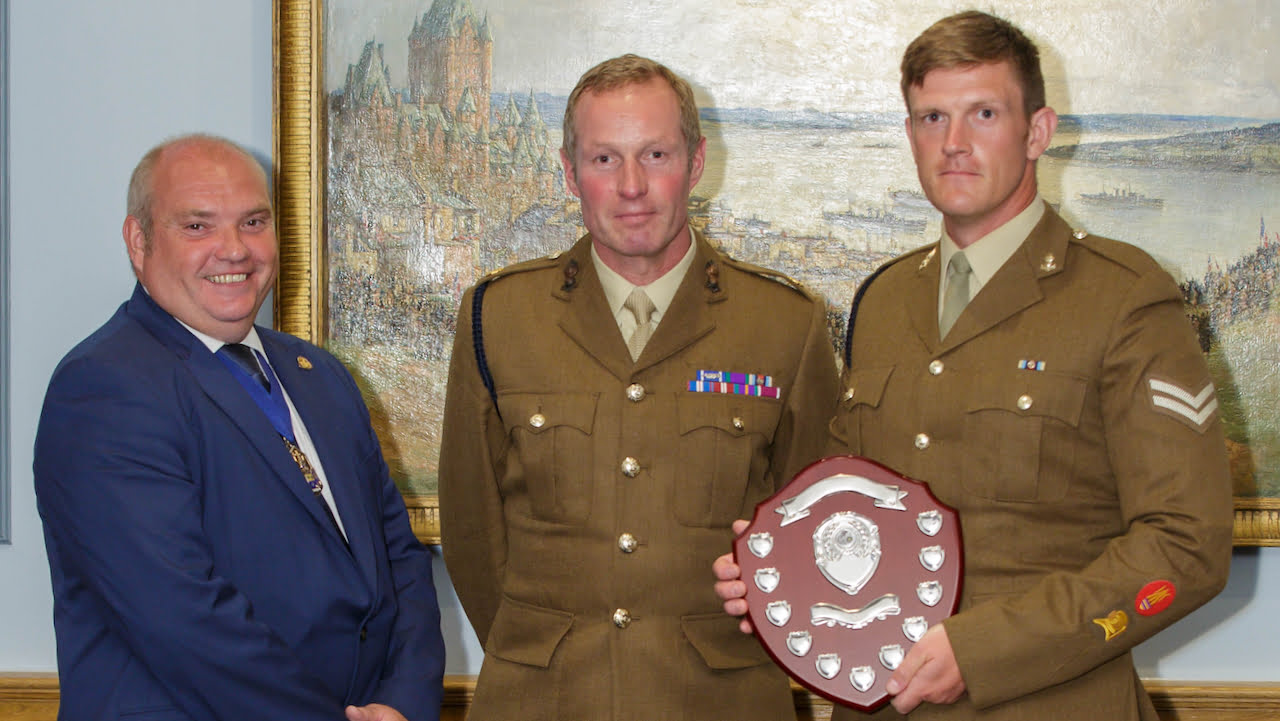 2022 Recipient of the Hector’s Shield

There are six Force Protection Wings based across the UK. Two of the Wings are designated as the lead part of the Joint Expeditionary Force, and are focused on RAF Police and RAF Regiment expeditionary capability (inclusive of Armoured Vehicles (Wheeled) and Military Working Dogs). The second Joint Expeditionary Force Wing also delivers RAF Ceremonial and JTAC capability. The four Multirole Force Protection Wings are tasked with providing a particular aircraft type or role with the necessary defence. The Multirole Wings are responsible for a geographic security region within the home base, as well as being the units of choice to deploy alongside their aligned aircraft types.

The Company’s NCO Leadership Award, The Ben Flenley Memorial Bowl, is presented annually at The Master’s Installation Lunch to a non-commissioned officer of the RAF Regiment who has displayed conspicuous leadership and courage beyond the normal call of duty.

The Royal Navy was affiliated to the Company in 2006. The ship nominated was HMS SEVERN. There followed some 11 years of dynamic interface with the ship and its pro-active crew. HMS SEVERN was subsequently decommissioned in 2017, and honoured at a ceremony in HM Naval Base Portsmouth on 27 October 2017 to mark the safe completion of her commission. The Royal Navy then nominated HMS MEDWAY to replace her, and she was adopted by the Company as our Naval Affiliate in 2018.

HMS MEDWAY is a Batch 2 River Class Offshore Patrol Vessel, named after the River Medway in Kent. She was launched in 2017, commissioned in 2019, and is currently deployed to the Caribbean as the Royal Navy’s permanent presence in the region. HMS MEDWAY supports the British Overseas Territories, and is ready to assist in the event of a natural disaster in the region.  The Ship also contributes to the efforts to counter Illicit Trafficking.

The Company’s Sailor of the Year Award, The Mike Welply Memorial Award, is presented annually to a member of HMS MEDWAY’s company.

The Royal Military Police (RMP) were affiliated to the Company in 2007. The RMP is the Corps of the British Army responsible for policing Army personnel and providing a Military Police presence, both in the UK and overseas on operations and exercises. The RMP trace their history back to 1527 when Sir Henry Guilford was recorded as the Provost Marshal for King Henry VIII.  In the 17th century the Provost Marshal and his troops were given formal policing responsibility for the Army when called for duty – and that continues to this day.

Since the Second World War, the RMP have been active in every operational theatre – the occupation of Germany, Palestine, the Suez Canal Zone, Korea, Cyprus, Kenya, Aden, Malaya and Borneo to name but a few. In more recent years, the RMP have served on the front line in the Falklands, the Gulf, the Former Republic of Yugoslavia, in Sierra Leone, in Iraq and in Afghanistan.

As well as carrying out policing duties in Garrison, on Exercise and on Operations the RMP have other Specialist streams. The Special Investigation Branch (the military equivalent of the CID) is responsible for the investigation of serious and complex criminality perpetrated by service personnel, their dependants and those civilians who fall under MOD jurisdiction (usually when serving abroad). Additionally, the Close Protection Unit provides specialist CP support to Senior Military Officers and Senior Government Officials to enable their freedom of movement and protection in high threat environments overseas – and RMP Officers and NCOs are deployed throughout the world fulfilling this role. Finally, RMP NCOs can train to be Crime Scene, Cyber Crime and Financial Investigators and in the whole sphere of Covert operations.

In 2011, as part of the 500th Anniversary of the Office of Provost Marshal (Army), Company Liveryman Brigadier Eddie Forster-Knight presented a sword to the Company, and asked that the Sword be awarded annually to the individual, who in the eyes of the Master and the Court, has achieved most to promote and support the work of the Company in that year, excluding the Master and Clerk. For further details of the origins of the award, and the list of recipients, please visit our dedicated page.

The Company’s Outstanding RMP NCO Award, The Colonel Herring Award for Excellence, is presented annually to a member of the Royal Military Police.

The RAF Police (RAFP) were affiliated to the Company in 2009. The RAFP provide specialist law enforcement, counter-intelligence and security services, identification and countering threats from terrorism, espionage, sabotage, subversion, extremism and organised crime in the UK and overseas.

The RAFP have been reorganised into the six Force Protection Wings based across the UK. Two of the Wings are designated as the lead part of the Joint Expeditionary Force and are focused on RAFP and RAF Regiment expeditionary capability inclusive of Armoured Vehicles (Wheeled) and Military Working Dogs.

The Company’s Award for the the most significant contribution to the protection of critical assets during the previous year, the Securing the Skies Award, is presented annually to a member of the Royal Air Force Police (RAFP).

3 Military Intelligence Battalion (3MI) have been affiliated to the Company since 2012. 3MI is an Army Reserve Unit under the operational command of Field Army Understand Group which reports through the Land Operations Centre to Commander Field Army and is based in London and Cambridge. 3MI is extremely operationally focused, with a number of its officers and soldiers currently deployed on operations overseas and the majority having recent operational experience. The Unit invariably has personnel deployed to European, Middle Eastern and African theatres of operations, as well as routinely supporting crisis and contingency responses from UK-based HQ.

3MI also provides reservist intelligence personnel to support various agencies from other Government Departments in Whitehall, Defence Intelligence at RAF Wyton and other locations and Permanent Joint HQ (PJHQ) in Northwood. Notably, the Battalion mobilised personnel as part of the Military’s contribution against COVID-19 during the fall of Kabul and most recently to support wider efforts in Ukraine. When mobilised 3MI Reservists fully integrate with, and work alongside, their Regular Army Intelligence Corps counterparts.

The Company’s Best Recruit Award is presented annually to a member of 3 Military Intelligence Battalion (3MI).

35 Engr Regt (EOD&S) were affiliated to the Company in 2020. The regiment is a unit of the British Army’s Corps of Royal Engineers, forming up in Carver Barracks near Saffron Walden, Essex. The Regiment provides search and bomb disposal capability in support of the armoured infantry brigades in the 3rd (UK) Division, as well as to the Theatre Enabling Group (a logistic brigade) as well as providing a continual on-call bomb disposal capability in support of the Royal Air Force.

In the short time since forming, the Regiment has deployed soldiers on operations in Iraq, sent training teams across Africa and the Middle East as well as exercising in Canada, Germany, Estonia and France. Most recently, they have led the testing programmes in Kent and Medway as part of the Defence contribution to UK resilience during the coronavirus pandemic.

The Company’s Hector’s Shield is presented annually to a member of 35 Engr Regt (EOD&S).