In 2011 the Provost Marshal of the Army, Brigadier Edward Forster-Knight CBE, as part of the 500th Anniversary of the Office of Provost Marshal (Army), presented a sword to the Company. He requested that the sword be presented annually by the Master to the individual, who in his eyes, had done most to promote and support the work of the Company in that year. It was further requested that the sword be placed on the table in front of the winner during any formal Company function at which he or she is present. In addition, he asked that the Company keep a record of the list of winners and to that end the Register was presented by Liveryman Ray Williams at the Annual Dinner held at the Old Bailey on 14 October 2021. 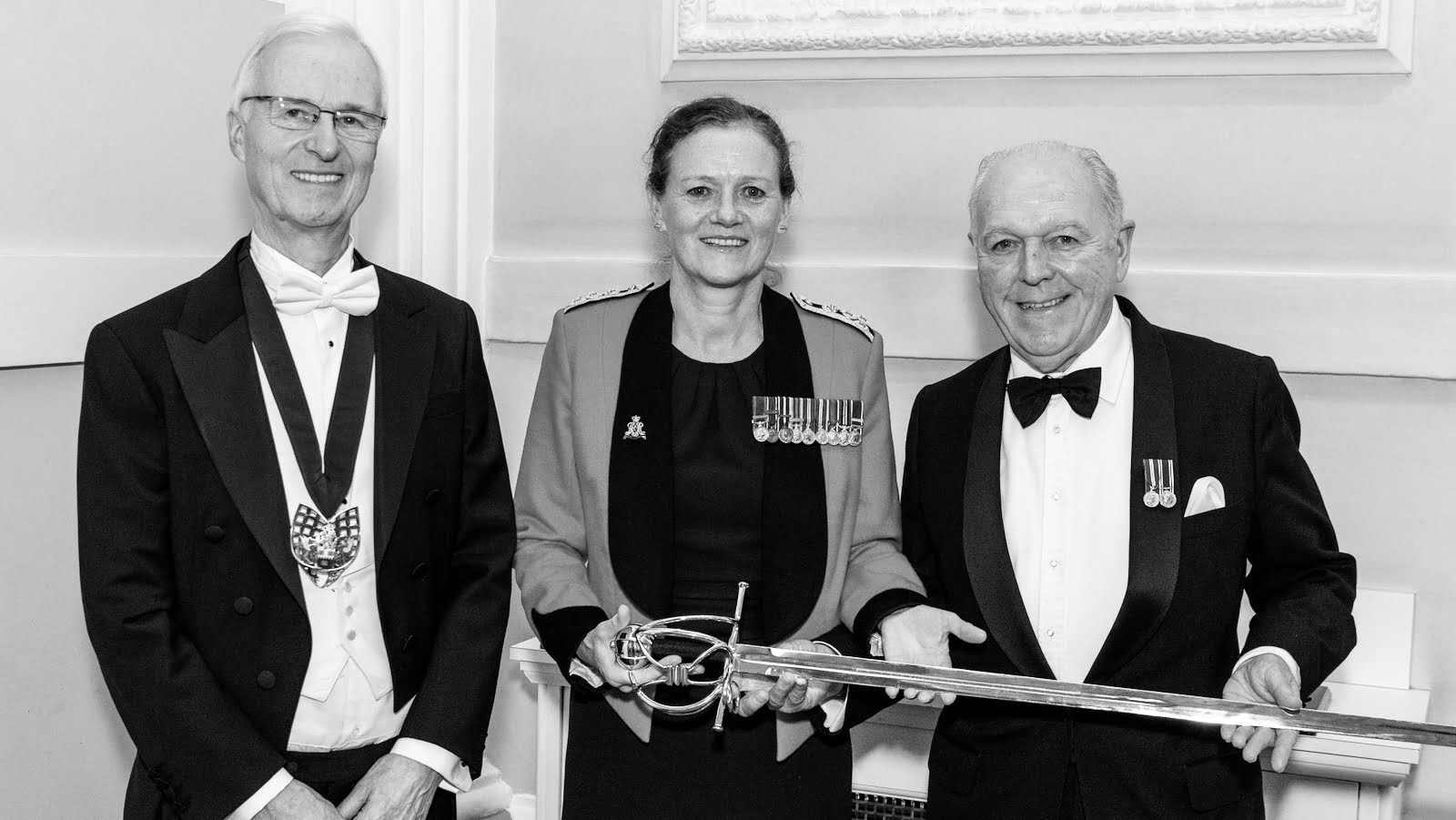 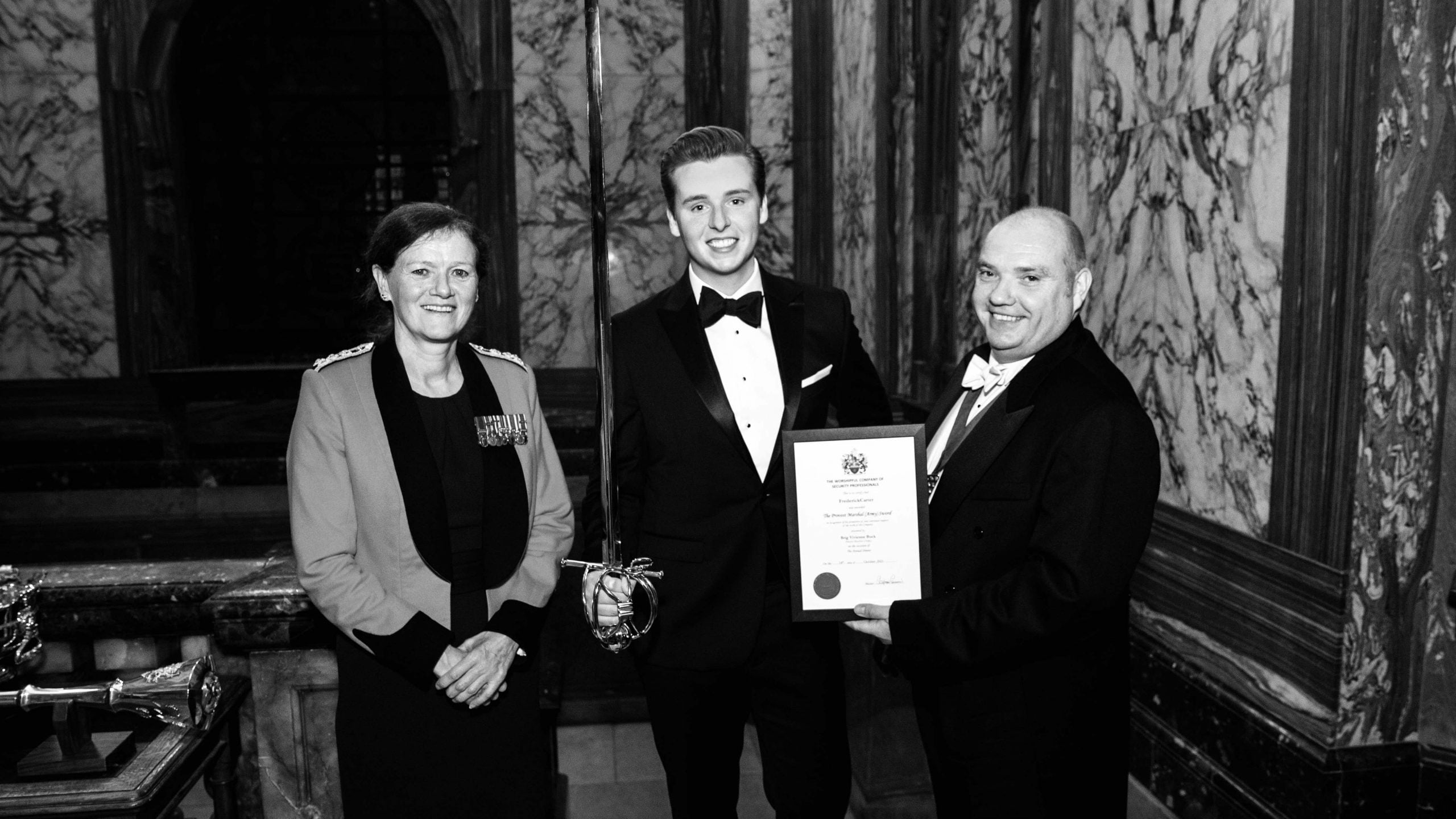 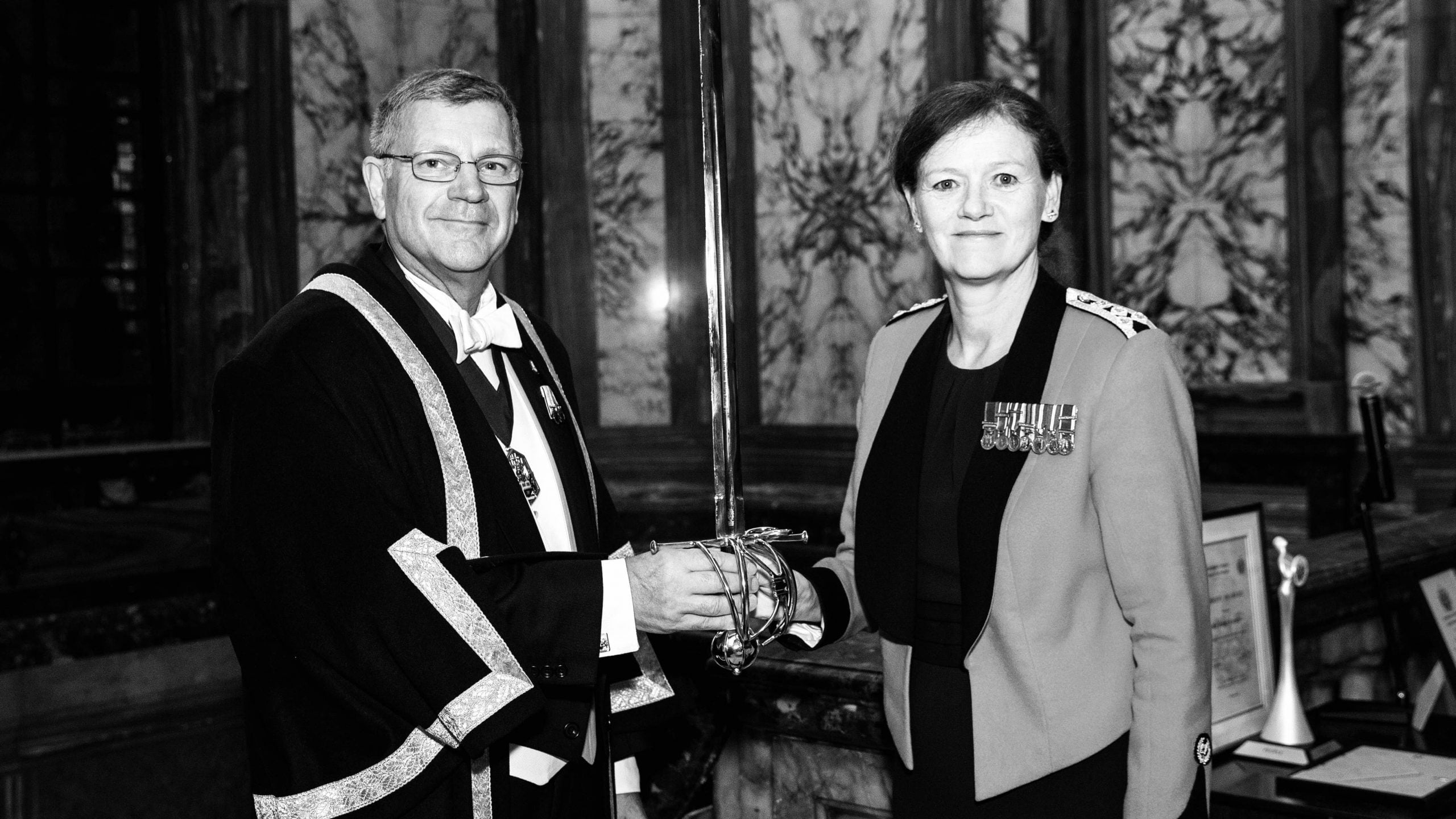 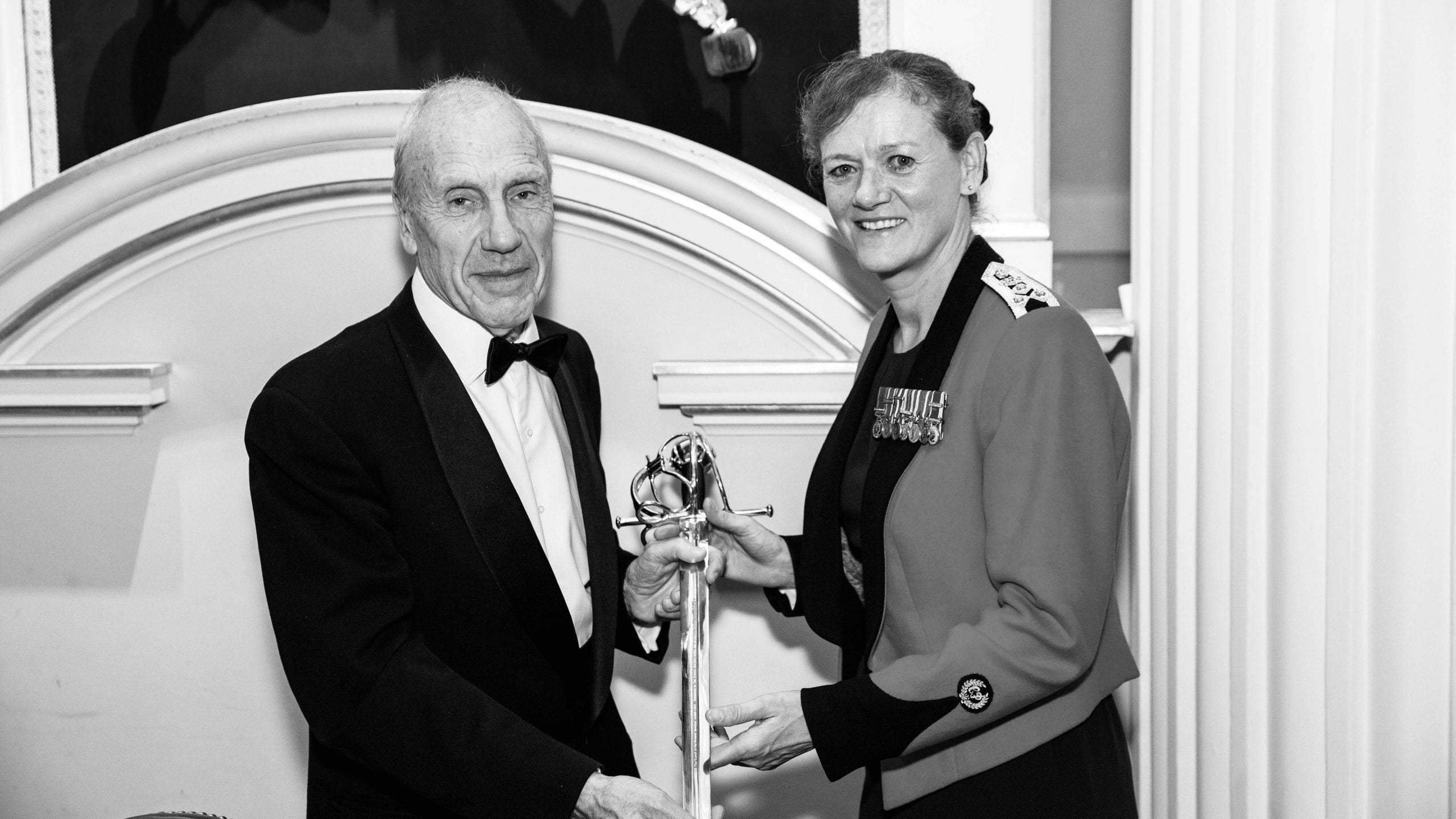 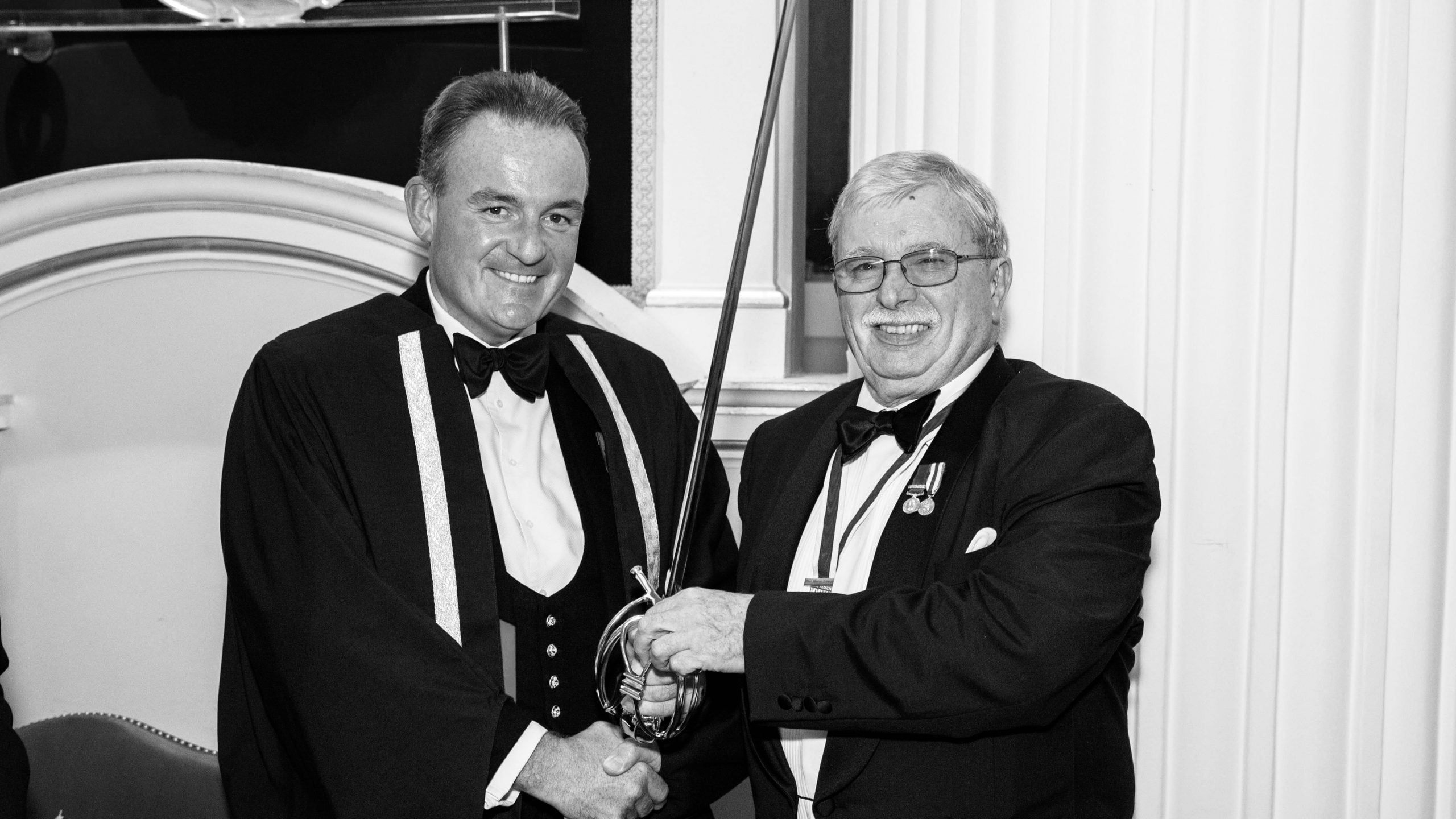 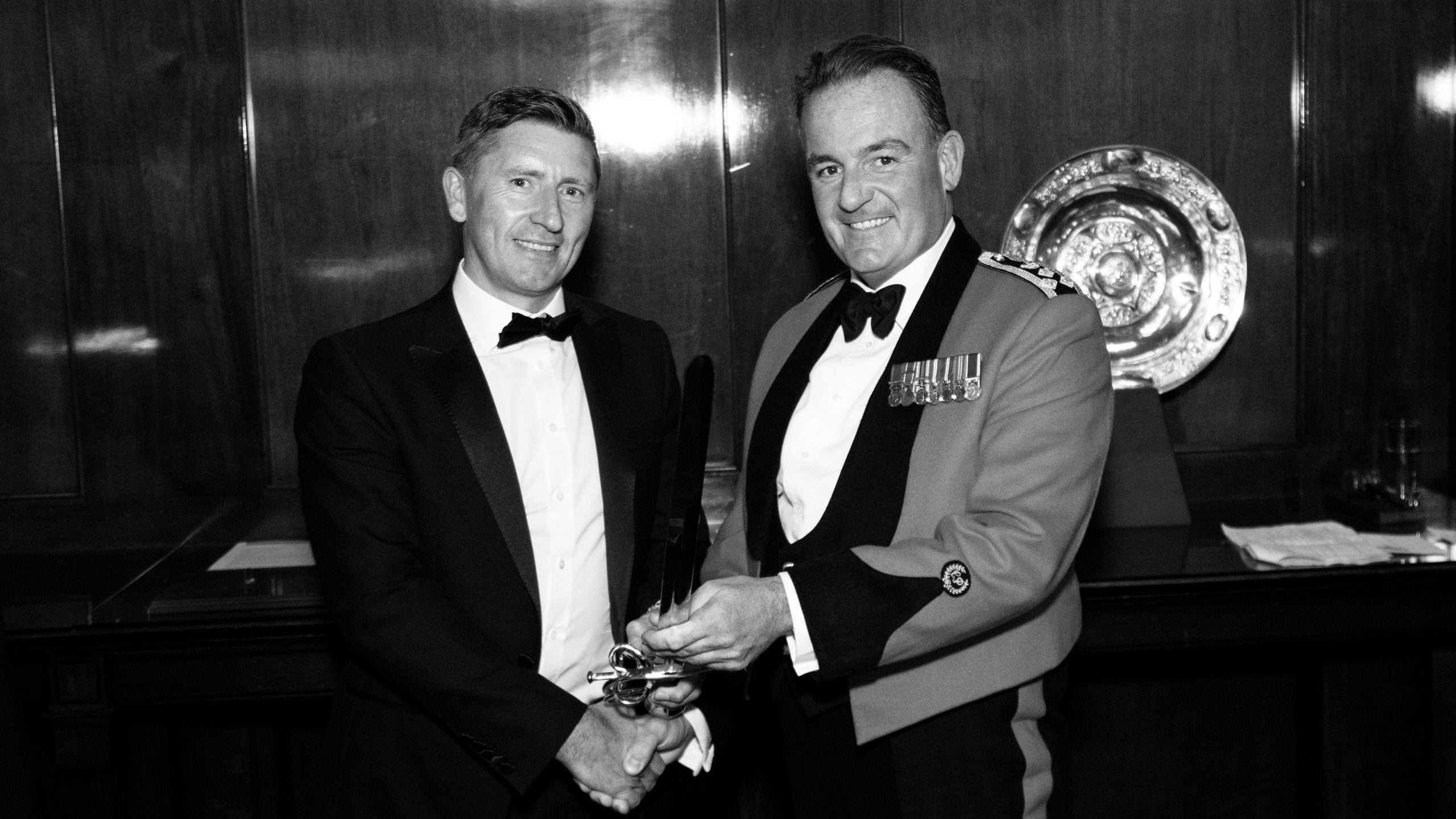 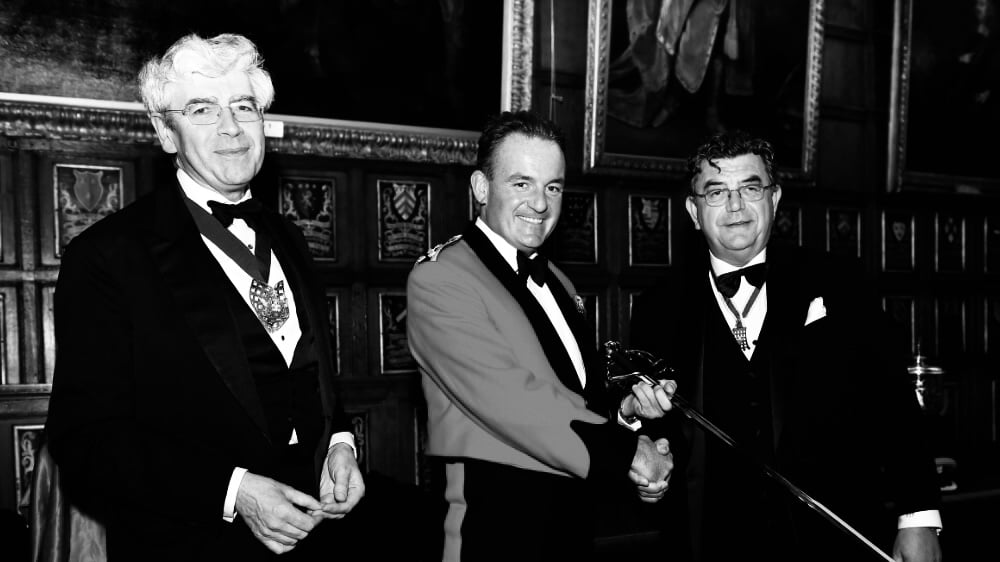 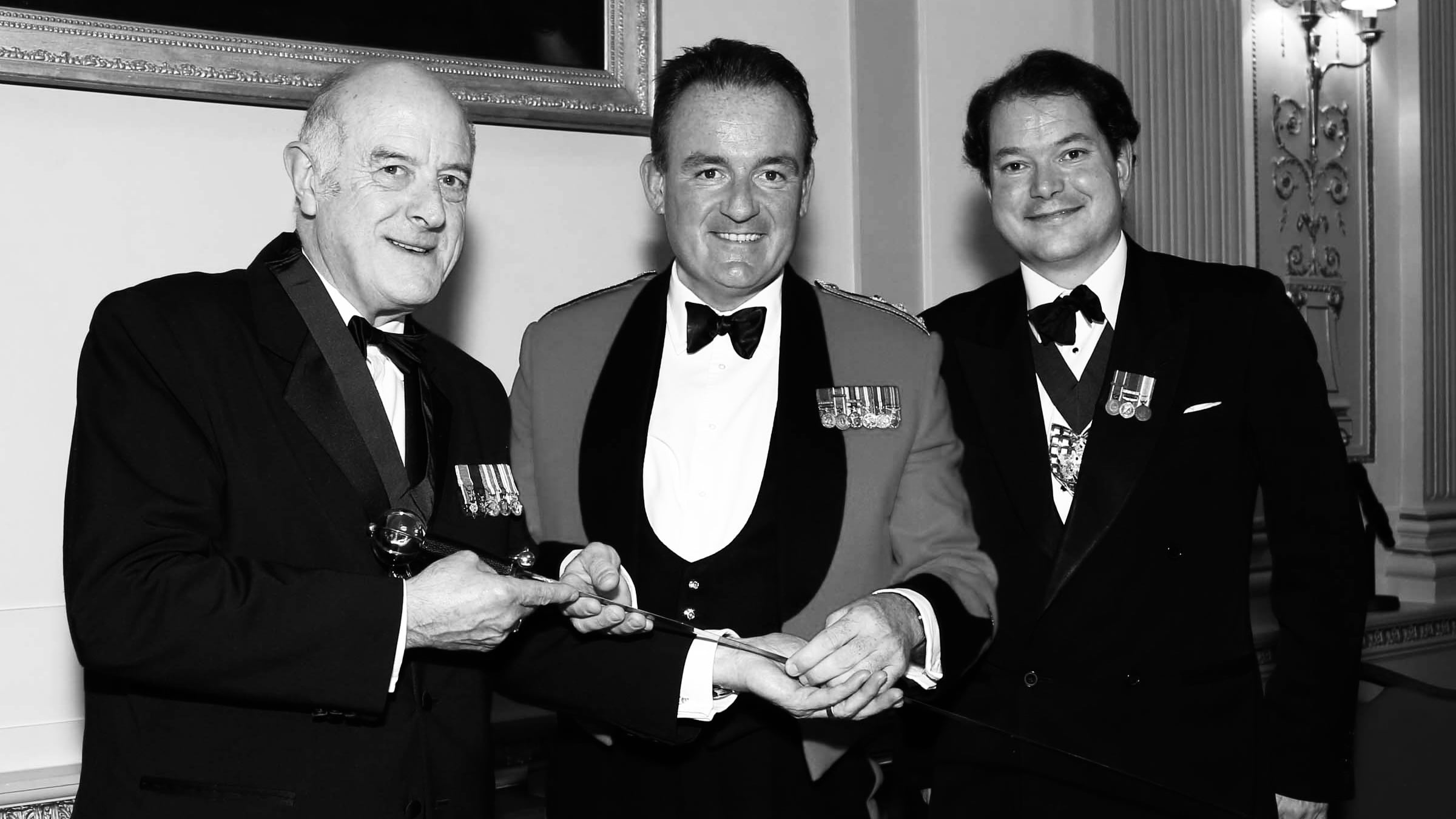 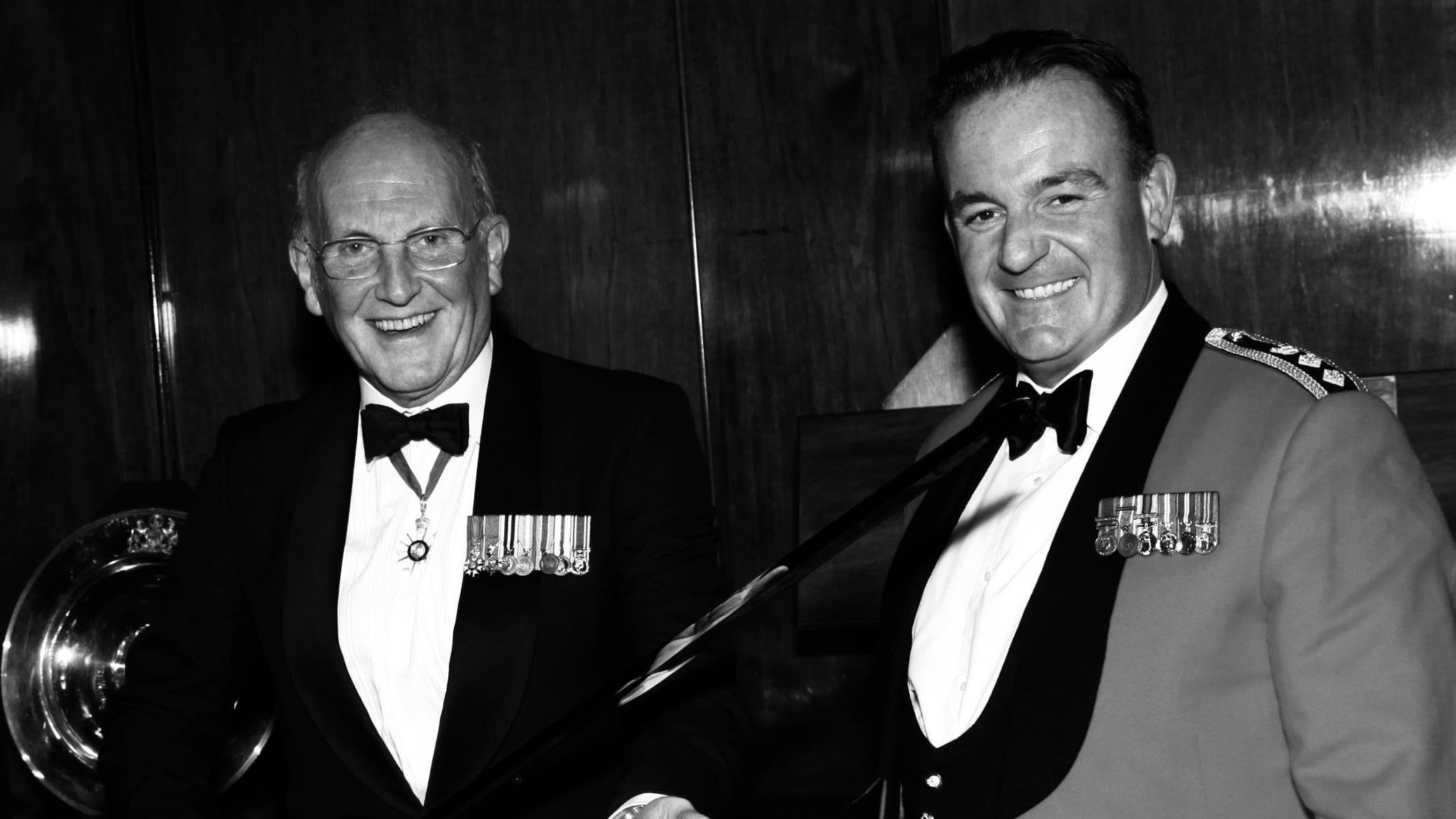 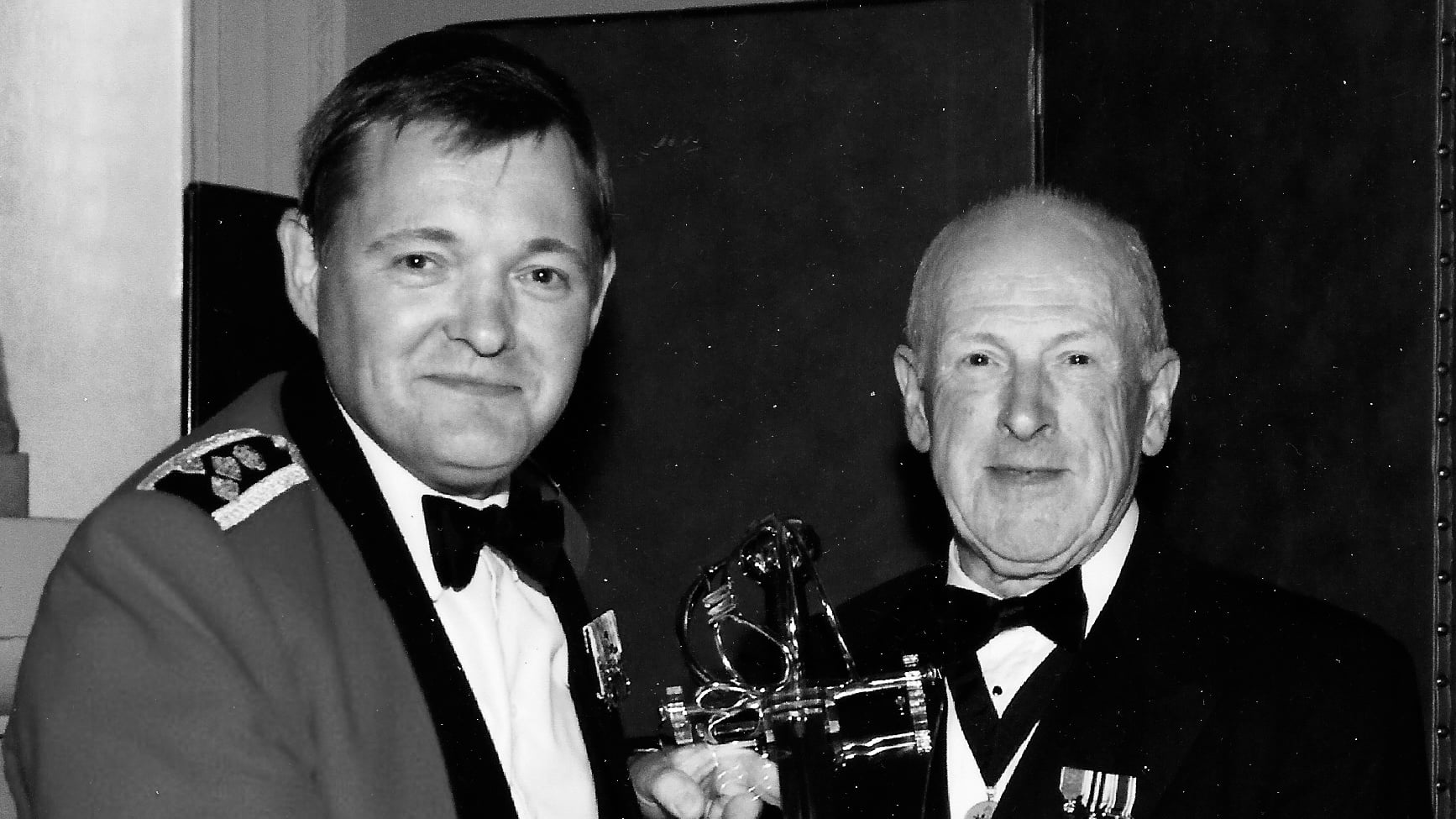 Roger has for many years been the organiser of the Security Dog Awards presented at Common Hall. He has been the man in the background liaising with the various dog handler groups to ensure that the bravery of the dogs and their handlers is recognised. Without his commitment, sense of humour and ability, the Company would not be able to make these awards which enhance our reputation with the military, law enforcement and the security industry. Without doubt he has brought credit not only on himself but also the Worshipful Company of Security Professionals and is therefore a very worthy recipient of this award. Roger was presented with the Provost Marshal (Army) Sword at Mansion House by Brigadier Vivienne Buck at the Annual Dinner on October 20th 2022. Full citation to follow.

Frederick’s contribution during the COVID-19 pandemic has been invaluable. As part of the COVID-19 and Communications Working Groups, Frederick enabled the digital capacity for virtual events, and managed the development of a new Company website with an event ticketing and payment processing system. In addition to making the Company more accessible, these projects have positively contributed to maintaining the Company’s strong financial position during unprecedented times. Frederick was presented with the Provost Marshal (Army) Sword at the Central Criminal Court of England and Wales by Brigadier Vivienne Buck at the Annual Dinner on October 14th 2021.

Michael has made a significant contribution as Chair of the COVID-19 Working Group. His follow up reports and coordination of members have ensured that the Company maintained a flexible response to the pandemic. As the previous Chair of the Marketing & Fundraising Committee, Michael has continued to support event planning and fundraising, including the coordination of the first virtual Christmas Party. His focus on membership engagement and the delivery of virtual ceremonies and events has been a key element in the successful delivery of ‘business as usual’ in a year of challenge and constant change. Michael has shown unwavering support and commitment to the Company. He has stepped forward in this difficult year as in previous years, offering his time, venues and donations, all without fanfare and always in good humour.

This year’s recipient joined the Company in 2001. He has served on more than one of the Standing Committees, was elected a Court Assistant and served the full 12 consecutive years. He continues as Sector Champion for Apprentice selection from Kings College, London, is an active member of the Apprentice Management Group and currently an Apprentice Master. He fostered and mentored the Young Members’ Group which, due to his influence, this year, achieved Standing Committee status. During the last 18 years he has been an unsung hero for the Company by quietly championing and influencing the progress of youth within the Company and subsequently the Livery. I am very pleased to announce that the recipient of the 2019 Provost Marshall Sword is Ray Williams.

Brian established the Company’s website in 2012 and launched ‘E News’, a well-read newsletter. As a Past Master, Brian has been a member of the three key Standing Committees: Finance and General Purposes, Membership and Marketing and Fundraising. In four years, his attendance record has been virtually 100% and his contribution quite outstanding. His advice has been continually sought by many senior members of the Company, particularly on finance and the Ordinances.He has also been a very pro-active member of the CSAG. With the effective absence of an IPM during my time as Master I consulted him extensively to very good effect. I can think of no other individual who has made such a huge contribution to the Company consistently over the last six-year period. He is a very well-deserved winner of this Award.

In 2012 Neill Catton was one of the founding members of the Young Members Group, becoming its first chairman in 2013.  Under his leadership the Group established itself as a dynamic part of the Company and a first-class recruiting vehicle. He quickly organised low-cost breakfast meetings to allow the membership to meet, discuss professional issues and still go on to complete their day’s work.These events became open to all members, especially our Apprentices, who derived much benefit in advancing their knowledge of the security profession. From 2014 to 2017 Neill played a key role delivering in the Whittington Course. He led the Company’s liaison with Bexley Academy, Barclays Bank, City of London Police, The Worshipful Company of Hackney Carriage Drivers and the Guildhall. For his outstanding efforts over five years, he was awarded the PM Sword.

Many Congratulations on being awarded the RMP Provost Marshal’s Sword for 2016. You are a very worthy recipient who has done as much, if not more, than anyone to nurture the Company from its early life through to early adulthood. Apart from your continued sterling efforts in raising funds annually through the Spring dance (this years being sold out) for the Charitable Trust and The Hackney Carriage Drivers Disney run, you were, I believe, responsible for the application for our Royal Charter. Following that you have taken a major part in the promotion of the Chartered Security Professional arrangements – not to mention you were a Past Master in 2007 to 2008 when the company was granted full Livery status. Thank you for what you have done and continue to do – a most deserving award.

Trevor was a critical member of the Company’s team that established the Sheriff’s Award following the London bombings of 2005. The award not only honours members of the emergency services but also importantly the spontaneous gallantry of members of the public who went above and beyond what might be expected of them with inspiring and truly courageous acts across the United Kingdom. The creation of this award greatly enhanced the standing of the Company in the eyes of the Lord Mayor and the City of London.

Richard was a founder member of the Company and led on the formation of the Charitable Trust which he chaired for several years. Drafting many of the early Company and Charitable Trust policy documents to ensure continuity and institutional memory informed future decision-making. An early supporter of the Whittington Course, he personally supported the head of Bexley Business Academy, one of our charitable schools, enabling students to achieve considerable academic success.  Similarly, Richard championed a grant scheme allowing young people from less well off backgrounds to attend the prestigious Reed’s Independent School. Helping to create the City of London Sheriffs’ Award for Bravery, Richard remains a member of its Working Group and continues as a member of the Court.

Steve has made an invaluable contribution to the Company with the help of many others, most notably Past Master Emeritus John Purnell, in turning the idea of a Livery Company for Security Professionals into reality. He has worked tirelessly promoting the Company’s active support of worthy charities. Chair of the Working Group reviewing the Sheriffs’ Award process clear policies and procedures were established for the future. Steve’s support of Bexley Business Academy and the Whittington Course led to the achievement of extraordinary academic results and in standards of citizenship. Steve is a co-organiser of the City of London Police Commissioner’s Dinners which have raised in excess of £50,000 for our Charitable Trust since their inception.

This was an exceptionally busy time for the Company advancing to full Livery status with increasingly sophisticated financial management. Parallel monetary issues included the application for Royal Charter, funding the Sheriffs’ Award and Old Bailey Honours Board, new fee structures for Retired and Overseas members, Young Members and the new Apprenticeship scheme.  The cost of City activities was constantly increasing and sponsorship more difficult to obtain. Strong financial management was essential if the Company’s business plan, calendar of events, Charitable Trust contributions and banking covenants were to be met and surpluses generated for the future. Treasurer Andrew Knights ensured all were achieved.

Roy was admitted to the then Guild in March 2001, secured his Freedom in 2002 and later appointed as a Court Assistant. Having elected not to advance to the office of Master, the Sword was awarded to Roy for his outstanding work as the chairman of various Committees including Membership, Finance and General Purposes and the ad hoc groups drafting the Ordinances and Bye Laws enabling advancement to full Livery and the successful application for Royal Charter. He later led the Membership Review Group creating the Young Members Group and re-launch of the Apprenticeship  Scheme of which he was founding chairman. Roy’s commitment has continued as advisor to the Succession Planning Group and as a Trustee and Deputy Chairman of the Charitable Trust.


Interested in becoming a member of the Company?
Fill out the form and the Clerk will be in touch to discuss your application.
Become a Member
Copyright © 2023 WCoSP. All rights reserved.
Back To Top