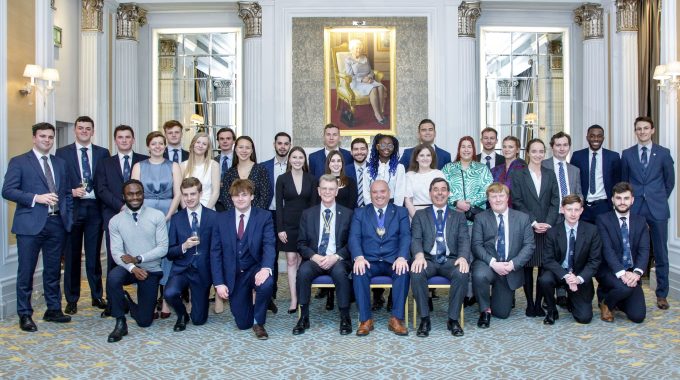 On Friday 6 May 2022, the Worshipful Company of Security Professionals were pleased to commemorate the 10th anniversary of our Apprentice scheme. In a speech given at the Royal Air Force Club, Master Stephen Emmins thanked those who have played notable roles in ensuring our scheme is regarded within the Livery Movement as one of the most successful and forward-thinking Livery Apprentice schemes.

The development of the scheme was led by one of the Company’s principle founders, Past Master Emeritus, and Honorary Liveryman John Purnell. In 2012, the Apprentice scheme was reviewed and updated by Past Master Stephen Anderton and Honorary Court Assistant Roy Penrose to create a modern and vibrant scheme with a clear set of objectives and requirements.

The management of the updated scheme was formally adopted by Court in 2012 and is overseen by the Apprentice Management Group; the Master noted the commendable work of Chair Andrew Knights, Richard Sweetman, Ray Williams, and Simon Imbert. The Master also extended his thanks to the sponsors of the scheme: Immediate Past Master Yasmeen Stratton and SSR, Senior Warden Paul Miller and National Monitoring.

Chair of the Apprentice Management Group Andrew Knights then took the opportunity to provide some statistical context to the success of the scheme. Of the 72 Apprentices who have taken part in the scheme, 32 are currently active Apprentices, 15 have become Freeman, and 16 are waiting to become Freeman, giving the scheme a retention rate of 77 percent.

Andrew acknowledged the work of our volunteer Apprentice Masters in providing one-to-one guidance to their Apprentices and said the final part of the jigsaw was the ongoing support from the entire Company.

Our Apprentice scheme is now widely regarded as one of the most successful in the City of London Livery. Testament to its success is Court Assistant Matilda Sherwood who now leads as Chair of the Young Members’ Group. Having taken her freedom in the same year that her Apprentice Master Stephen Anderton was Master of the Company, Tilly shared her experience of the scheme.

Tilly mentioned many of the opportunities she has been afforded as a result of being an Apprentice, including being able to visit the Old Bailey, Tower of London, US Embassy (London), and Drapers’ Hall. She is now a member of Court and took Livery as part of Roy Penrose’s scheme. Tilly has also now become the first Apprentice to then go on to take on her own Apprentice.

Finally, we were privileged to have the senior Aldermanic Sheriff of the City of London, Alderman Nick Lyons, as our guest of honour. He gave a speech in which he addressed the broader goals and history of apprenticeships, celebrating a dedication to young people and the provision of a vital bridge into sustainable employment. He also acknowledged the longstanding connection we have with the Sheriffs though their annual Award for Bravery that the Company sponsors. Alderman Lyons wished to congratulate all those in our fine Company, particularly the Apprentices and Apprentice Masters.

We are grateful to the Northern Trust Corporation for generously sponsoring the Apprentice Scheme Anniversary celebration event.