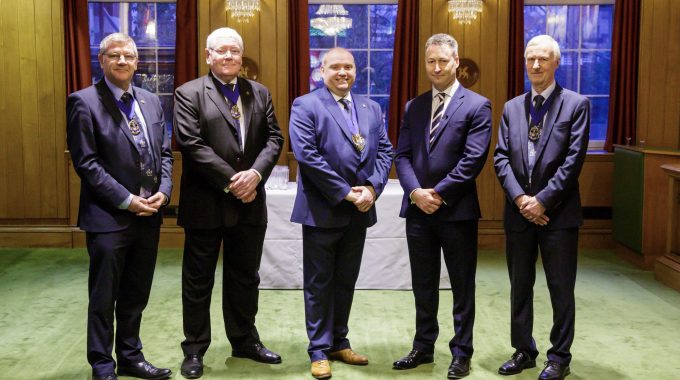 After a fantastic run up to Christmas with the Carol Service and Christmas Lunch we went into Plan B and not only our events, but City events were postponed. We are now back into the swing of things starting with our Founders’ Service in the Tower of London. I had the great pleasure of clothing Alderman Professor Michael Mainelli as Honorary Liveryman of the Company, which was followed by a lovely service which our Honorary Chaplin had based on the theme of Her Majesty the Queen’s Platinum Jubilee. The following supper in the Little Ship Club was a very friendly affair with many of our Liverymen, Freemen and Members able to mix and move around the Club that we had sole use of. I was very pleased that some of our members expressed an interest in joining committees and being stewards.

The Sheriffs Reception at the Old Bailey was well attended by senior officers from the Blue Light services and our Affiliates. Both Alderman & Sheriff Alison Gowman and Alderman & Sheriff Nicholas Lyons gave interesting and uplifting speeches on re launching the Sheriffs Award for Bravery. It was really good to see the current main recipient Lukaz Koczocik with his partner. I also had the great pleasure of giving Honorary Freedoms to City of London Police Commissioner Angela McLaren, Commanding Officer 3MI Lt Col Maddie Lewis and Provost Marshal Gp Capt Russ Foster-Jones RAF Police.

I attended the Charitable Trust strategy day which was very thought provoking, and it was good to see that we are in a great position and helping some fantastic charities at the moment.

We had a full house of CSyPs at the annual lunch in Armourers’ Hall hosted by the Security Institute. Three newly qualified CSyPs were awarded their certificates at the lunch, taking the total to 248 CSyP’s.

I was the first WCoSP Master to host the Modern Companies Dinner; this goes back c15 years and 70 dinners with the first ever Modern Companies dinner hosted by the Master Mariners, livery number 38. We hosted some 40 different Livery Company Masters and Wardens, and had Murray Craig, Clerk to the Chamberlain’s Court providing after dinner entertainment (Murray retires this month).

We are looking for new members to join the Company and I urge all of you to recommend anyone you feel would benefit, be active members, and enjoy the Company to join us.

Dinner with the Commissioner of Police of the Metropolis

On Friday 6 May 2022, the Worshipful Company of Security Professionals were pleased to commemorate…

Recent Posts
Follow Us
Categories
Follow Us
Recent Posts
Recent Projects
Tags
Anniversary Event Apprentice Scheme Chair Charitable Trust Funding Livery Met Police Metropolitan Police Service Middle Warden Police Commissioner Spring Dance Trustees
Interested in becoming a member of the Company?
Fill out the form and the Clerk will be in touch to discuss your application.
Become a Member
Copyright © 2021 WCoSP. All rights reserved.
Back To Top
This website uses cookies to improve your experience. We'll assume you're ok with this, but you can opt-out if you wish.
Cookie SettingsAccept All
Manage consent