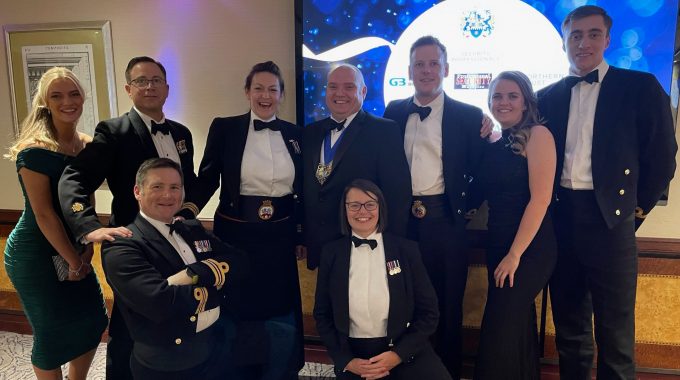 A fantastic evening was enjoyed at the 20th Annual Worshipful Company of Security Professionals Spring Dance at the Leonardo Hotel, Tower Hill. We raised over £45,000 with donations still being received.

A huge thanks to everyone that supported all the charities through attending, bringing a guest, volunteering, bidding, sponsoring, contributing items and buying a raffle ticket. This wouldn’t be such a success without YOU!

Fundraising on the evening included an online auction, with exceptional items donated that ‘money simply can’t buy’. Past Master Peter French MBE, supported this year by a glamorous group of board holding ‘helpers’, did a fabulous job keeping the evening on track. The auction ramped up the fun with lots of ‘bid action’ and some tactical playing exposed throughout the night. The popular raffle kept everyone involved and the chance to be a winner of some prizes that anywhere else would be auction items. Entertained by Irie J and ABBA nation, the audience were singing and dancing most of the night.

Phil Davies, Past Master of the Hackney Carriage Drivers (WCHCD) introduced Dr Lauren Johansen, Consultant Hepatologist at Birmingham Children’s Hospital who delivered a moving account of the positive impact the Magical Taxi Tour has had on the 5000 young people, suffering from a range of chronic debilitating illnesses and life limiting conditions, who have taken the three-day trip of a lifetime to Disney® Paris.

Another charity to benefit is the Security Benevolent Fund (SBF); established to offer help for those that have been employed in the security sector but need a helping hand. The SBF and Trustees deal with an increasing volume of requests, each meticulously reviewed to ensure fundraising efforts are delivered where needed.

Singer Irie J serenaded all with his smooth tones and soul classics during dinner. Later in the evening, ABBA nation arrived and chaos erupted everywhere and continued past midnight with Irie’s 90’s music set keeping everyone on their feet.

As in previous years, the team effort and Company members support were again outstanding.

We are looking forward to our 21st year celebration in March 2023!