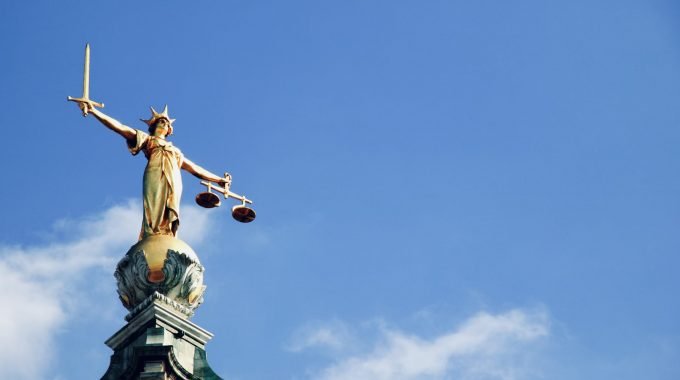 On 29th October 2021, it was a privilege for the Apprentices to be invited to a private tour of the Central Criminal Court, given by Sheriff Alderman Alison Gowman.

Commonly referred to as the Old Bailey, the Central Criminal Court has been the capital’s principal court for centuries. The current main building was designed by Edward W. Mountford and built in 1902 on the site of the medieval Newgate jail. On the dome above the Court stands the gilt bronze statue of Lady Justice by sculptor F. W. Pomeroy. She holds a sword in her right hand and the scales of justice in her left, but unlike other statues of justice, she is not blindfolded.

We started off the tour by visiting Court Number One, the most famous Court Room in the world. In the centre is the dock where murderers like Dr Crippen and Peter Sutcliffe (the Yorkshire Ripper) once stood. Historically reserved for the most serious and high-profile trials, Court Number One has also recorded the changing attitudes to the death penalty, homosexuality and freedom of expression. The Court has remained as it was when it opened in 1907, with its austere wood-panelling and its original furnishings, down to the velvet curtain which protects the identity of the witness. This contrasts with the more modern Court 5. We then proceeded to the impressive Great Hall, decorated with paintings by Gerald Moira commemorating the Blitz. The serious tone of the hall is emphasised by the axioms running all round the walls, such as: “The law of the wise is a fountain of life”.

After leaving the Great Hall, we were reminded of a dramatic event which occurred in 1973, when the IRA exploded a car bomb in the street outside, killing one and injuring 200 people. A shard of glass from one of the windows is preserved, embedded in one of the walls.

We then descended to the prison cells and our visit took a chilling turn when we entered a very special one: the cell where the condemned would wait in terror before being led down Dead Man’s Walk to their execution by hanging. The Death Penalty for murder was abolished in Great Britain in 1965. The pit where the bodies were disposed of terminated our visit.

We are most grateful to the Master Stephen Emmins for facilitating our visit and we would like to extend our heartfelt thanks to Sheriff Alderman Alison Gowman for the warmth of her lively and informative presentation.

Charlotte Scott, Apprentice to the Company.