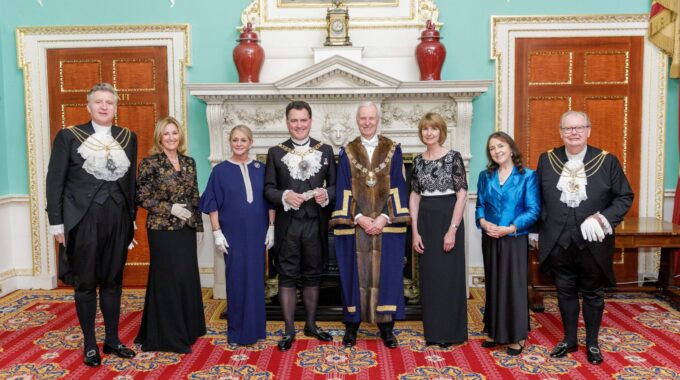 Thursday, 20th October 2022 saw one hundred and eighty-nine of us celebrate our Annual Dinner in splendid style at The Mansion House, the official residence of the Lord Mayor of London.

The evening started at 6.30pm with guests and members being received and greeted by the Master and his wife, Paul and Vivien Miller, together with the Senior Warden and his wife, Russell and Helen Penny, before enjoying a drinks reception. Our Principal guests included the Rt Hon The Lord Mayor and Lady Mayoress; Alderman and Sheriff Alastair King and Ms Corinne Lee; Sheriff Andrew Marsden and Mrs Marian Gamble; the Provost Marshal (Army) Brigadier Vivienne Buck; and Mr
Rayan Bouguerra, the Principal Recipient of the 2022 Sheriffs’ Award for Bravery.

At 6.55pm our Company Beadle Paul Craycraft, sounded the dinner gong and invited members and guests to take their places in the Egyptian Hall for dinner. The Master, Wardens, Immediate Past Master and Clerk then processed into the Hall accompanying the Principal Guests. Once all were at their places the Clerk, Mrs Adrienne Harper, said Grace after which dinner was served. A glass of Port ended a magnificent meal.

The first toast of the evening was to The King. A poignant moment for us all, as it was the first time since the passing of Her Late Majesty Queen Elizabeth II that we had met as a Company and drunk to the health of our monarch. The Master then explained the history of the presentation of the Provost Marshal (Army) Sword, and explained that this year’s recipient was one of those members who worked quietly and efficiently in the background supporting the Company, particularly by ensuring the annual “dog awards”, held at Common Hall, went to plan. The Master named Liveryman Roger Kember as the
worthy recipient this year.

Brigadier Vivienne Buck, Provost Marshal (Army) then presented Roger with the Sword, which during the forthcoming year will be placed on the table in front of him at any formal Company function that he attends. The Middle Warden, Michael Thwaites, then delivered a brief history of the Sheriffs Award for Bravery. He then asked the Beadle to read the citation for the principal recipient, following which Rayan Bouguerra was presented to the Sheriffs and received their award.

As a student from Ireland, studying in UK for only a few weeks, Rayan had seen a distressed female standing on the wrong side of the parapet of London Bridge. He called the police and tried to talk her back to the right side of the bridge. She threw herself into the Thames, however, and Rayan with no regard for his own safety, immediately jumped in after her.
He managed to grab hold of her and save her from drowning, until both were rescued by the RNLI.

The Master also presented the King’s College Essay Prize to Matteo Natlacen for his essay as part of the ‘Terrorism and Counterterrorism’ course. The Master then proposed the toast to the Guests after which the Rt Hon the Lord Mayor responded by proposing “The Worshipful Company of Security Professionals, may it flourish root and branch forever.”

The feedback from the members and guests was that it was a thoroughly enjoyable evening.

The Young Members' Group (YMG) hosted their New Year's Drinks on 21 January 2022. Despite…

Despite it being a rainy Saturday, over 100 people from the warmth of their own…