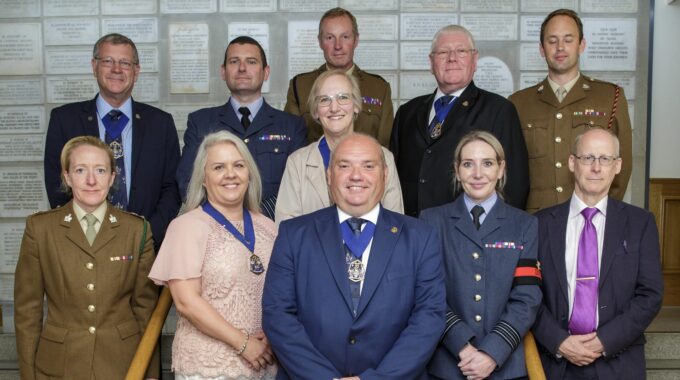 Despite the planned rail strike which threatened to affect travel and events on Thursday 23 June, the Service Affiliates’ Lunch went ahead at the Union Jack Club in London.  The Lunch, an annual event coinciding with Armed Forces Week, honours our Affiliates and the relationship they have with our Company.  The Company has six Affiliates, listed here in order of Affiliation: RAF Regiment, Royal Military Police, RAF Police, 3 MI Bn, HMS MEDWAY and 35 Engr Regt (EOD&S). Each year the Lunch is hosted by a different Affiliate and this year it was the turn of the RAF Police.  Our RAF Liaison Officer, Squadron Leader Phil Hitchen organised a splendid team who brought 2 static displays – ‘Afghanistan’ and ‘Women in the RAF’ – as well as arranging for Police Search Dog ‘Ninja’ to accompany who was, of course, the star of the show!  Fortunately Ninja did not have to put any of her training into effect during the Lunch but naturally showed a keen interest in her surroundings!

The Lunch was attended by over 50 Company members, guests and winners of the 2022 WCoSP Annual Affiliates’ Awards.  The guests were welcomed to a drinks reception after which the Immediate Past Master Steve Emmins (sadly the Master, Paul Miller, could not attend due to testing positive with Covid), Wardens and Principal Guests were clapped into the dining-room.  A 3-course Lunch was enjoyed by all, after which the Beadle read out all 6 Citations in turn and the winners were presented with their Award and Certificate.   The winner of the RMP Award trophy could not attend but it was presented to Major Tom Blackmore on her behalf.  HMS MEDWAY’s winner was presented with his Certificate having already received his trophy earlier in the year on board the Ship, which is currently deployed to the Caribbean.  The IPM thanked the Sponsor of the event, Axis Communications, and presented a Certificate to their representative.  Finally, the guests were treated to an interesting and thought-provoking speech by the Guest of Honour, Professor Philip Davies, Director of the Brunel University Centre for Intelligence and Security, who asked everyone, in time honoured fashion, to toast the WCoSP – ‘May it flourish root and branch forever’. The Military Affiliations Page on the WCoSP website will be updated with photos and Award winners’ names, where appropriate.

Our special thanks go to the RAF Police and Sqn Ldr Hitchen’s team for hosting the event, to Axis Communications for their sponsorship, to the UJC for providing a splendid venue, tasty lunch and good wines and of course to Prof Davies.  Whilst numbers were fewer than in previous years it showed that those who attended made a supreme effort to travel into London and not let a rail strike deter them!

We hope to see you at the next Affiliates’ Lunch in June 2023.

Recent Posts
Categories
Tags
Charitable Trust Disney Worshipful Company of Security Professionals
Interested in becoming a member of the Company?
Fill out the form and the Clerk will be in touch to discuss your application.
Become a Member
Copyright © 2022 WCoSP. All rights reserved.
Back To Top
This website uses cookies to improve your experience. We'll assume you're ok with this, but you can opt-out if you wish.
Cookie SettingsAccept All
Manage consent